Back to Profile Gallery > The Braun Corp. 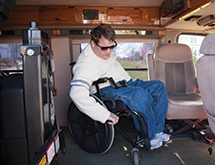 It’s rare that a business can say it legitimately helps people by giving them more freedom and mobility, but The Braun Corp. can. Based in Winamac, Ind., the company manufactures wheelchair vans and lifts that are sold around the world, Manufacturing Engineering Manager Andrew Roberts says.

Founder Ralph Braun started the company in 1972 and was its first actual customer, Roberts says. When Braun was young, he was diagnosed with spinal muscular atrophy, which left him unable to walk and confined to a wheelchair at the age of 15.

Braun found that the use of his wheelchair left him exhausted, so he developed an electric scooter called the Tri-Wheeler in his cousin’s farm shop in 1963. With the electric scooter, Braun could travel to work in any kind of weather.

When his employer relocated, Braun converted a former post office jeep by adding a wheelchair ramp. “He could drive that back and forth to work,” Roberts says. When the first full-size van hit the market, Braun created a lift that came out of the side doors.

The innovation gained Braun the attention of the disabled community, many of whose members wanted him to build ramps for them, as well. “He got calls from other parents saying, ‘We have a kid that’s in the same situation,’” Roberts says. “He [manufactured them] every night in his garage with his cousin.”

Eventually, Braun received so many orders that he formed his own company. Today, 60 percent of Braun Corp.’s work consists of wheelchair vans, and lifts make up 40 percent. The company manufactures 70 to 90 lifts a day, Roberts adds.

Braun, who died last year, lived to see the publication of his memoirs, “Rise Above,” and was present when the company celebrated its 40th anniversary in 2012. Roberts notes that Braun Corp. remains a leader to this day.

“In terms of wheelchair-accessible vehicle manufacturing, we’re No. 1 in the world,” he says, noting that the company holds the same position in commercial lift manufacturing. “When you say our name in this industry, [people] know we’re the biggest.”

Braun Corp. is not resting on its laurels, Roberts says. Instead, the company is investing in new technologies and decommissioning its older punch press and manufacturing equipment.

“We’re trying to clear up some areas in our fabrication [areas] and fill them with better equipment,” he states. Braun Corp. recently added laser cutting and stamping machines that have helped improve its quality.

In another effort to improve quality, the company has utilized lean manufacturing tools since 2007. Its lean journey began when Braun Corp. acquired Independent Mobility Systems, based in Farmington, N.M., which was a converter of Toyota minivans.

This required Braun Corp. to incorporate Toyota’s lean production system into its own operations. Since then, the company has improved its efficiency by 50 percent and its safety rate by 100 percent.

“We’ve had a lot of success in our vehicle assembly areas,” Roberts adds. “We’ve carried that over into our fabrication facilities, [and] they are rapidly getting to that same level that vehicle assembly is at now.”

Braun Corp. also sets itself apart by its vertical integration, Roberts says. “We are our No. 1 supplier of parts,” he declares, adding that the company makes its own hydraulic cylinders and sheet metal parts.

Braun Corp. also has its own powder-coating facilities at its 250,000-square-foot location in Winamac. With this system, “We can adapt to changing environments and quality issues very quickly,” he says. “We can make quick engineering changes on the floor.”

Braun Corp. is working on building its presence overseas, Roberts says. “We have never really been a successful international company,” he admits, but asserts that the firm is working to change that.

Three years ago, it acquired 50 percent of Autoadapt, a vehicle adaptation products company based in Stenkullen, Sweden. “That’s our bridge into the European market,” Roberts says, noting that Autoadapt sells Braun Corp.’s products.

Last year, the company acquired 50 percent of FOCA-BRAUN, a Brazil-based manufacturer of access control products for the Latin America transmit market. By partnering with the firm domestically, Braun Corp. gets a better understanding of the Brazilian market, Roberts says.

“That seems to be the new international strategy,” he says. “Over the next 10 years, you’re going to see us home in and become an international leader.”

Looking ahead, Braun Corp. is exploring several new projects, including partnerships with Purdue University. It is also working on a Ford Explorer model that will be the first SUV in the wheelchair van market. “That will have the full conversion that people come to expect out of a minivan,” Roberts says.