Back to Profile Gallery > The Crosby Group – Lebus Manufacturing 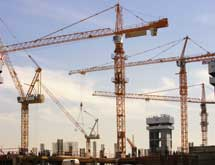 Wherever anything heavy is lifted with a chain or wire rope – whether in an oil field, construction site, maritime or manufacturing – one of the 1,500 products from The Crosby Group’s Lebus Manufacturing plant in Longview, Texas, may be in use. “We are always used only where life and limb is in danger,” emphasizes Chris Higgins, vice president and general manager of the Longview plant. “Every single product we send out of here has to have a quality pedigree that certifies it will lift what it’s supposed to lift. We have a 2.5-to-1 safety factor built into them.”

That means a shackle rated to hold 8.5 tons is certified by The Crosby Group to lift 21.25 tons before it will start to deform. It is designed to deform under load rather than break. Marks in quarter-inch increments on every product can be checked to indicate deformation. “Heat treating gives us the elasticity not to have a catastrophic failure,” Higgins notes.

Everything made at the Longview plant is heat-treated, he says. Heat treating reorients the molecules in the steel by heating, quenching and then tempering the metal to different temperatures. This gives the metal the desired qualities of working load limit, ductility, fatigue and toughness.

All the steel used to forge products at the Longview plant is made in the United States and analyzed chemically before manufacturing to ensure that it meets the company’s standards. A slice from each 100,000-pound round ingot of steel is analyzed in a mass spectrograph. The surface of the slice, called a coupon, is vaporized, and the spectrograph determines the relative levels of each material and alloy in the steel as well as its cleanliness.

Since 1977, the Longview plant has kept a record of each product manufactured there in a product identification code (PIC). “I can tell you where the steel was the day it was made, the equipment it was made on, the heat treating it went through, the day it was shaped and the die used,” Higgins asserts. This traceability is important if questions arise years after a product was manufactured.

The records have progressed from paper to microfilm and now digital files. The reduction in storage space is appreciated by Higgins. The file cabinets filled with paper files used to line every wall, he says. “We make between 60,000 and 80,000 forgings a day at this plant and over 7 million forgings annually,” he reports. “Everything we do is forged.”

At the Crosby Group’s home office in Tulsa, Okla., products are designed on computer systems. Then finite element analysis is applied to determine what the product should do under load. “Then we actually sink a die to that product specification,” Higgins relates. “We heat the material to 2,350 degrees and form it in these forge dies and then machine it or do whatever else to finish it.”

The Longview plant has approximately 300,000 square feet under the roofs of a dozen buildings. Inside these buildings, 13 drop-forge hammers ranging in capacity from 2,000 to 25,000 pounds forge steel from half- to 10-inch diameter round steel ingots. “After forging, 99 percent of them are machined or altered in some way before being assembled into the various products,” Higgins relates.

Approximately half of the plant’s 25 vertical and horizontal CNC machines do die sinking, and the rest are lathes or mills that machine products. Drills and roll and cut threaders also work the products.

Many of the company’s forging operations have been centralized in Longview. Forgings also are made in Crosby’s plants in Belgium, France and England. Its other manufacturing plants are in Tulsa, Okla.; Little Rock, Ark.; and Brampton, Ontario.

Higgins began working for the company 38 years ago in its Portland, Maine, plant, assembling delivery boxes. “I’ve worked in every area, in every department,” he declares. When that plant closed and moved its operations to Longview, he came with the equipment and instructed employees in how to operate it.

He estimates the Longview plant, which is ISO 9001-certified, produces approximately 40 percent of the company’s total forgings. “I’m going to go out on a limb and say we have the most efficient forged die sinking shop in the world,” Higgins maintains. “We bought high-speed machines and hired the right people and trained the right people to be able to run multiple machines and sink multiple dies at the same time.

“In the forging area, we have developed some trimming and bending operations our competitors would like to have,” he continues. “Anybody who’s working on the product is paid a piece-rate incentive above and beyond their standard wage. That’s why our product is so good.”

That is especially impressive when one considers that during the summer, the ambient air temperature by the forges may be as high as 130 degrees F. “It’s not much fun from June through September,” Higgins says. In these conditions, people operate more reliably than temperature- and dust-sensitive automated equipment.

The plant has a full-time specialist on staff who implements lean manufacturing and just-in-time concepts in cooperation with employees. “We have a week-long event and take four to five people off the floor – as well as their foreman or manager and the lean manufacturing guy – and go in a training room, brainstorm and ask their ideas,” Higgins explains.

“We’ve been able to take a lot of cost and excesses out of the manufacturing and been able to control our inventory to a tremendous degree because of that,” he points out. “We still machine things the same way we did 30 years ago, we just do it faster. We have three or four machines together in a cell where we used to have one person doing one job and pass it to the next. We try to combine as many operations as we can.”

Production decreased after the plant’s best year in 2008 to such an extent that 25 percent of the staff had to be laid off. But business has improved so much that all but 5 to 6 percent of those employees have been rehired. “We’ve had six months straight of steady increases in our booking and sales,” Higgins reports. “Our production line has just gone nuts. We always have a two-week shutdown in July. We’re going crazy trying to get caught up. That’s a good problem.”