Back to Profile Gallery > The Earthwise Group LLC 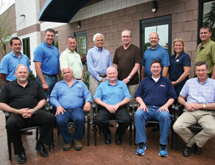 The window and door industries can be very competitive, but the companies of The Earthwise Group LLC have thrived by maintaining close partnerships, Executive Director Mark Davis says. “Since the formation of our group, we’ve achieved above-average market growth every year, without exception,” he says.

Based in Liberty Township, Ohio, the Earthwise Group is a network of independent vinyl window and door manufacturers that serves the replacement, remodeling and new construction markets. Davis explains that the group was formed in January 2004 after its founders began discussing collaborative manufacturing about a year prior.

The companies decided to work together, he notes, after seeing a steady increase in business failures among small and medium-sized window manufacturers in the United States. “We decided that we weren’t going to sit on the sidelines and become part of that statistic,” he recalls.

Today, the Earthwise Group has 15 manufacturing locations and distributes its products in 37 states. “We work together for the benefit of all our members in the general areas of purchasing, operations and marketing,” Davis says, noting that the firms produce a combined total of up to 700,000 windows annually.

“Our regional manufacturing philosophy enables us to provide another unique advantage to our customers,” Davis says. “Though all of our member companies make essentially the same products, we make them in configurations that provide the best performance and value in the markets in which they will be installed. For example, the insulated glass package that we use in the hot climates of Texas and Florida is different than the one we use in the colder climates of Minnesota and New England. Most large national manufacturers can’t offer that type of manufacturing flexibility.

“We’re stronger and more competitive as a group than we could ever be as individuals,” Davis says. “I think that any of our members would probably tell you that becoming a member of the Earthwise Group is one of the best things they’ve done for their business.”

Davis has 35 years of experience in window and door manufacturing. “Most of that time has been spent in general management roles,” he says, adding that he now manages group activities for the Earthwise Group. “I keep our group projects on track so that our members can focus on their individual businesses.”

Each of the group’s members, he adds, works closely with one another. “Rather than 15 competing manufacturers, we’re 15 manufacturers who collaborate with one another on a daily basis,” he says. “Essentially, all of our members have a panel of expert advisors at their disposal whenever they’re needed.”

Those who attend group meetings, conference calls and other functions are typically the owners and senior managers of the member companies, Davis says. “Due to the vast amount of knowledge and diverse experience that we have within our group, we’re able to help each other in all sorts of different ways,” he says. “We’re much more than a purchasing group.”

For instance, all Earthwise member companies make essentially the same products and follow similar marketing strategies, Davis says. “As a result, our members achieve very significant cost savings in all areas of their businesses; not just in raw materials. For example, our average member can save tens of thousands, if not hundreds of thousands of dollars per year on product testing and marketing costs alone. Since we all make the same products, we can spend group money once and provide benefits to all of our member companies automatically.”

Earthwise works closely with a small, preferred group of suppliers to create “win-win” relationships, Davis says. “It’s very much a partnership. For most of our suppliers, we’re their largest customer,” he says. “But we’re also one of their best customers. As a group, we buy high volumes of a small number of parts. As a result, our suppliers get the benefit of highly efficient production runs, and we get the benefits of short lead times and very competitive pricing.”

Earthwise also earns rebates from its suppliers that it reinvests into group growth initiatives. “Instead of writing checks to ourselves, we take our rebates and reinvest them in the growth of our group,” he says. “In this way, our suppliers can reasonably expect that their investment in us will pay dividends in the forms of increased group purchases and enhanced customer loyalty.”

So far this year, Earthwise firms are enjoying steady growth, Davis says. In terms of sales, “We are up 16 percent over last year,” he says, noting that this is much higher than most competitors. “Our annual sales are well north of $100 million.”

The Earthwise Group is also in the early stages of a plan to extend its reach to the western United States, Davis says. “After that will be Canada,” he predicts. “We’ll be looking for prospective new manufacturing partners in those markets over the next year or two.

“While there are some requirements to become a member of our group, we’re generally interested in talking to any window manufacturer who is financially stable, has a great reputation in their market area, and thinks they could benefit from the advantages that we bring to the table.”