Back to Profile Gallery > The Hillman Group 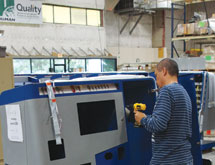 One of the most important things a business can do is provide its employees with support. The Hillman Group focuses on empowering employees to do their jobs, Senior Vice President of Operations Rob Lackman says.

“The leadership team here makes good decisions for the employees and the health of the company,” he declares. “I think that’s critical [for] a good organization to operate from the bottom up.”

Based in Cincinnati, The Hillman Group specializes in distributing fasteners, keys, letters, numbers, signs and other hardware products to retailers, such as Walmart, The Home Depot, Lowe’s and Sears, as well as  independent hardware stores. Founder and CEO Max (Mick) Hillman Sr. started The Hillman Group out of his garage in 1964, according to Lackman.

Since then, the company has evolved into a $565 million business that steadily grew through acquisitions. Most recently, Lackman says, the firm purchased OOK, a Miami-based firm that distributed picture hangers.

OOK has strong brand recognition, which is critical to The Hillman Group. “We can comingle it with the products that we have so we’re more in a position to be a one-stop shop,” Lackman says. “If there’s a competitor out there that fits in our market space, a strategic acquisition would be reviewed.”

Today, in Cincinnati, Hillman Group has its headquarters and a distribution center that is “really our mother ship,” Lackman says. “It does over half [our] business in the United States.”

In addition, the firm has locations throughout the United States, as well as Canada, Mexico and a new distribution center in Melbourne, Australia. “That’s a whole new market for us,” Lackman states.

Lackman is a returning veteran of The Hillman Group. Previously, he worked for the company from 1988 to 1995. Before returning in 2010, Lackman served as the executive vice president of the purchasing and supply chain of Duro Bag Manufacturing.

But during Lackman’s time away from Hillman Group, he remained friends with its CEO.

“I knew that I would return to The Hillman Group as the core values of treating employees fairly is a key in the DNA of success,” Lackman says, adding that he appreciates the culture of The Hillman Group. “The leadership team is really dynamic. Mick [makes] good business decisions in a pretty quick fashion. In today’s work environment, it is critical to have good planning skills and execution.”

These good decisions include empowering its workers. Often, Lackman says, senior managers will meet and discuss ways to do that, while setting goals and objectives. “We have roundtable discussions to see what we’re doing right and what we’re doing wrong,” he says.

The Hillman Group always remembers that its success is a team effort, Lackman adds. “There’s many people in the organization that contribute daily to our success,” he says. “We identify our top performers and keep them in a promotion path. Employee engagement continues to our daily quest to a productive workforce.

“I think those are the things that made me want to come back here, compared to other companies in today’s environment,” Lackman admits. “The employees are still important to Mick Hillman.”

Hillman shows this importance, Lackman says, by conducting employee service awards breakfasts to honor veteran employees. “He also does one-on-one sessions with departmental employees to get their feedback on how we are doing,” Lackman adds.

“These are just examples of Mick ‘walking his talk,’” he continues. “While many companies cut out these types of programs, Mick keeps them high on his list.”

Another contributor to Hillman Group’s success, Lackman notes, is its vendor, GAINSystems Inc. Based in Oak Brook, Ill., the firm provides supply chain planning and optimization services and has international branch offices in Switzerland and France, along with affiliate offices in Australia, Mexico and Croatia.

According to Lackman, Hillman Group has utilized GAINSystems for the last four years and is pleased with its work. “[They have provided] better forecasting accuracy and automation of the forecasting process,” he says, noting that Hillman Group will continue using the firm in the future. “This has our [sales and operations planning] team spend time with our valued customers and enter forecast changes live into the system.”

With 70,000 SKUs, The Hillman Group sources many of its products from overseas. While it does produce letters, numbers and signs at its location in Tempe, Ariz., the majority of its operations are focused on distribution, Lackman says.

“Our goal is to provide over 97.5 percent fill rate and next day shipping to our customers,” he says. “Daily metrics track our performance to ensure that we provide the best service to our customers each and every day.”

The firm strives to be innovative in that area, he asserts. With its many locations, “We can deliver anywhere in the United States in two days,” he says. “Our competitors have a tough time keeping up.”

Despite its dominance, The Hillman Group has not rested on its laurels. Instead, the company utilizes lean practices to ensure it has “the right concepts in place to utilize space,” he says. This has allowed the firm to maximize its productivity and quality.

Through this process, “Hillman constantly reviews processes that waste time and ultimately cost money,” Lackman says. “The distribution business is a ‘pennies business’ and it is critical to improve [operations].

“In 2013, we implemented a companywide quality initiative to improve overall quality to our customers,” he continues. “All employees discuss their quality, productivity, attendance and safety weekly, with their immediate supervisor.”

This weekly engagement process has enabled the number of totaled errors to decrease by more than 10 percent. “We also have a recognition program Bronze – Silver – Gold program with incentives for our top performers,” Lackman says.

“We’ve seen our errors in packing [go down] by 20 percent,” he reports. “Our picking quality has gone up by two points. We’re close to 100 percent now.”

The Hillman Group also takes pride in its charity work. Corporate Communications Manager Teresa Moran says the company began focusing in this area three years ago when it decided it wanted to give back to its communities. In 2010, a Community Involvement Committee was formed.

Since then, she says, the company has donated to the Make-A-Wish Foundation and has sent three children to Walt Disney World. “Make-A-Wish (Ohio, Kentucky and Indiana chapter) is something that we believe in strongly and will continue to do,” she says.

The Hillman Group also has contributed to the National Breast Cancer Foundation (NBCF) Inc. However, the company’s contribution to the organization goes beyond simple contributions, Moran asserts. The company conducts an annual fundraiser, and sells a specialized line of keys and accessories where a portion of the sales goes to the foundation. In 2011 and 2012, the NBCF awarded The Hillman Group with the Platinum Level Sponsor Award.

In 2012, Hillman Group saw a rise in sales, Lackman says. “The business is [nearly] recession proof,” he says, noting that aside from 2008 and 2009, it grows its revenues annually. “Our products continue to sell.”

He adds that The Hillman Group was recognized for its work in 2012 with a 2012 Partner of the Year for Hardware from The Home Depot. “[It] is really an outstanding [honor], going against our peers in our space,” he says.

The Hillman Group has its sights set on becoming a billion-dollar company, Lackman says. To achieve this, he says, Hillman Group is looking into acquiring more companies.

On Dec. 18, 2012, Hillman Group announced a definite agreement with H. Paulin and Company, which provides for the acquisition by Hillman Group. “The strategy is simple; buy companies with adjacencies that complement our product line and add value to our customer’s product offering to their customers,” Lackman says.

Moran adds that she believes the company will continue looking at charities it can contribute to. In 2013, “We’re looking at Toys for Tots, Soles4Souls and a corporate work study program for local high students,” she says.

You can find The Hillman Group on all the popular social networks: