Back to Profile Gallery > The Will-Burt Company 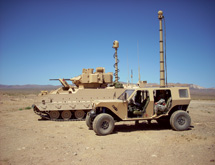 When TV news stations report on the scene, they often rely on The Will-Burt Company and its telescopic masts, President, CEO and Chairman Jeff Evans says. “Everyone has seen a broadcast truck [with a mast],” he says, noting that electronic newsgathering is one of its major client markets. “We, at one time, had 100 percent of [it].”

The company has made a habit of reinventing itself over the years, Evans says. For instance, Will-Burt began as a general repair shop, was a contract manufacturer for the U.S. military during World War II, and then it specialized in coal-fired heating devices in the 1950s.

This flexibility keeps it successful, Evans asserts. “You see too many companies that get tied to what they used to do, even [major corporations] like Polaroid,” he says.

Between 1993 and 2000, Will-Burt acquired new buildings and equipment that helped improve its operations. “By the turn of the century, we had a better business,” he says, noting that the firm also invested strongly in its engineering.

Today, Will-Burt employs a staff of 400 that not only serves the broadcast news market, but also military, entertainment, law enforcement, fire and rescue, oil and gas, and cellular and mobile communications. “We really want to sell solutions,” Evans says.

Will-Burt’s two general businesses  include contract manufacturing, where it serves “major, domestic and regional equipment manufacturers where quantity amounts are small, but quality is high,” Evans says. Its clients include Caterpillar and Volvo Road Machinery.

Its other business consists of its telescopic mast work, whose users are not limited to TV news crews.  “We for more than 25 years have provided masts for the Patriot missile,” Evans recalls. “We’ve got masts in military use [now] for that kind of purpose, [as well as] for surveillance and for perimeter defense.”

He notes that these practices have become more common in the firm’s industry. “I don’t know if there’s any company that’s not doing it on one level,” he says. “It is just part of regular business today.”

The firm also was an early adopter of ISO 9000 standards, first achieving certification in 1994. “Our Chief Technology Officer, Anatol Kwartler, is constantly making sure we’re continuing to do the right things,” Evans says. “People here know it is part of their process to [follow those regulations]. For example, our quality process gives the authority and responsibility to every employee to stop production if they see an inconsistency between blue prints, work orders or other product documentation. They then get a supervisor or engineer to correct the problem before making any more parts.”

The Good and the Bad

After nearly 100 years, Will-Burt has seen its “good years and bad years,” Evans admits. But the past 10 years were particularly profitable, and it improved its balance sheet by paying off debt and generating cash.

This was good news for employee shareholders. “Will-Burt is 100 percent employee-owned and those who have been here have seen their stock increase to where they’re going to have very good retirements,” he says.

However, recent developments in Washington, D.C., have had their negative impacts on Will-Burt, Evans admits. “Highways are not getting built,” he says. “As a result, our sales to construction companies are down significantly.”

The military side also has seen a downturn with projects that “continue to be delayed and others have just been outright cancelled,” Evans says.

One market that is enjoying growth is oil and gas, which Will-Burt serves primarily from its Oklahoma facility, ITS Towers. Along with other markets, this has kept Will-Burt busy enough to where it was able to give bonuses to all employees in 2012. The company also is developing fracking plugs that it will offer to the oil and gas market.

In spite of the challenges, Evans sees continued success. “We are looking to grow dramatically,” he says. “Over the last three years, we’ve focused more on growth than profits. We now will return our focus to driving efficiencies, lowering costs and improving our profitability.”

Something that will continue to separate Will-Burt from its competitors is its ability to customize products that can be integrated with those from other companies. “We have large market shares,” he says. “That just can’t happen if you make a mass product. Given our large manufacturing footprint, we can focus more on mechanical integration [than most of our competitors].”