Back to Profile Gallery > Thermwood Corp. 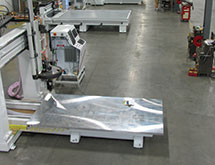 From its beginnings, Thermwood Corp. has incorporated a high level of technology in its business. The company was established in 1969 as a plastic molder of wood-grained parts.

During the last 40-plus years, Thermwood has developed a number of innovations. These include a unique molding process and the first commercial CNC machine tool control. Much of the plastic molding and trimming machinery Thermwood used was designed and built in-house.

Located in southern Indiana, Thermwood operates in a facility that is about 175,000 square feet and employees about 100 people. Besides producing the first CNC router, Thermwood is known for producing high-quality machines and controls, as well as for the capabilities of its service department.

The company’s customers cover a wide range of industries ranging from single-employee cabinet shops to some very large and widely known companies. The interiors of most commercial jet airliners are processed on Thermwood machines, as are many helicopter blades, structural parts for military aircraft and tile underlayment for the space shuttle.

“Thermwood machines produce parts from bowling alleys and bicycle helmets to spas, motorcycle parts and truck bodies,” Susnjara says. “Many of the sets on Broadway were built on Thermwood machines, as were sets for many movies. Our machines helped rebuild Windsor Castle and the Opera House in London. Even NASA has used Thermwood machines to build the Mars Flyer and Mars Lander. For us, every day is exciting due to the sheer differences of the industries we serve.”

Numerous methods are employed to help Thermwood reach its target markets. At one time, print advertising was the only way. Now, the Internet is key.

“We sell our equipment to various industries, and it’s easier to do via the Internet because you can target a larger amount of people, with more information,” Susnjara says.

Supporting Thermwood’s legacy of innovation is a team of creative thinkers with extensive engineering backgrounds. The company continuously tries out new and different ways to make its equipment more successful for the customer and easier to use.

Strong relationships with vendors are also extremely important. Thermwood has developed solid ties with vendors big and small, which has a lot to do with the quality of the product and service the company can provide. For example, Andantex USA, a provider of high-precision motion control components and systems, offers good service and on-time deliveries.

“Their knowledgeable engineering staff is very courteous and quick to respond to sizing and maintenance questions,” Susnjara says.

Thermwood is refining on a new machine for the wood industry. The company came out with this new machine last year but it is continuously working to perfect it.

“We call this new machine the Cut Ready, Cut Center,” Susnjara says. “All CNC machines need to be programmed either with entering lines of code or using some sort of design software. The Cut Center requires zero programming and software using an intuitive control interface that runs through a series of questions that the user answers.”

As the company looks ahead, it realizes that the collection of dust particles is a big issue, whether in wood, plastics or composites. The ability to remove those airborne particles effectively is a main goal of Thermwood as it grows through 2015.

In addition, 3-D printers are a big item right now. Thermwood was involved with the first 3-D printed car for the subtractive portion, and it has decided to follow that up with the development of a six-axis 3-D printer.

There are a few challenges for the company to face. For example, in the wood industry – specifically cabinet and closet making – the Chinese are importing cheap CNC machining centers, making it difficult to compete on price alone. For a technical company such as Thermwood, it is important that it works on finding ways to come up with better solutions and outstanding customer service.

The currency exchange is sometimes damaging as well. Thermwood exports products all over the world. When the U.S. dollar strengthens, it makes exporting much more difficult and gives importers a price advantage.

Fortunately for Thermwood, it has a long history of demonstrating excellence and leadership in the development of high-performance, affordable CNC routers. There is every reason to believe that Thermwood will be able to confront and move past its challenges as it strives to build a company that can compete for another half-century and beyond.