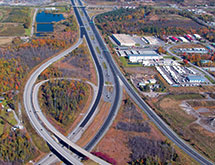 Keeping two lanes of a highway open during 24-hour construction with only a four- and eight-hour period each day during which lanes could be closed kept Thomas Cavanagh Construction Ltd. challenged. The project required the addition of new lanes within the existing Highway 417 corridor in the west end of Ottawa. In Canada, a 400 number indicates the highway is at least four-lane.

“We had to maintain one lane in each direction at all times,” Project Manager Chris Fischer emphasizes. “We were restricted as to when we could do lane closures. To do some of the work, the daytime window was only between 10 a.m. and 2:30 p.m. The night shift provided us with an eight-hour window from 10 p.m. to 6 a.m. This was the biggest window. So all the paving happened at night. It’s with 180,000 tons of hot mix paving that we’ve completed this project.”

Paving at night meant extensive use of portable lighting equipment to ensure that the worksite was kept lit. “Our paving equipment is equipped with lighting mounted right on it,” Fischer points out. “They have tall lights that are built right on the machines.”

Additional responsibilities that night work necessitated were ensuring that all safety measures were being followed and that crews and lanes were completely opened by 6 a.m. every morning in order to allow the safe passage of rush-hour traffic.

The highway expansion project extends from Highway 7 to the Eagleson Road exit. Construction started in November 2011 and was completed this November. “Now it’s just the little details that need to get finalized,” Fischer says.

Approximately 5 kilometers of Highway 417 was widened to four lanes to handle the additional traffic to the west end of Ottawa as well as the Canadian Tire Centre stadium in west Ottawa – where the Ottawa Senators hockey team plays – and 3 kilometers was widened to three lanes from Palladium to Highway 7. The project also included installation of an advanced traffic management system throughout the contract, as well as an additional 6.5 kilometers east to Highway 416.

“It’s a system of cameras with a fiber-optic link to the Ministry of Transportation, to what they call the Traffic Operations Centre, which is their main center located on Preston Street in Ottawa that the ministry uses to monitor Ottawa highways and dispatch repairs and emergency services,” Fischer explains. Thomas Cavanagh Construction also installed the fiber-optic cable underground that the system uses.

During the construction period, traffic had to be moved back and forth from old to new highway. “The project was staged so you moved traffic toward the outside in stage 1,” Fischer describes. “We reconstructed the median first, then we pushed traffic into the median and reconstructed all the outside in stage 2. The challenge was to maintain traffic at all times and coordinate the work that needed to be done in the various stages.”

Fischer had to ensure that everything that needed to be done in every section of the project was completed before opening it up to traffic. “Once you closed in the median or the outside, you didn’t have the opportunity to go back,” he stresses.

Two new bridges with steel girders and cast-in-place concrete decks were constructed over the Carp River, and three existing underpasses that were part of on- and off-ramps extending over the highway were rehabilitated. The longest bridge built was just under 20 meters long and approximately 3 meters above the Carp River.

“We built two new bridges in the median and then put traffic onto those,” Fischer relates. “We added two lanes and built an entirely new bridge that connected to the old one for the footings and the abutments. We demolished the old two-lane deck, rehabbed the existing footings and abutments and reconstructed it with new girders and a new deck. So you create one big four-lane bridge. You end up with two new four-lane-wide bridges as opposed to two narrow ones.” The new bridges required pilings approximately 20 meters deep.

“The bridge rehabs were on post-tensioned, cast-in-place concrete box bridges,” Fischer says. “Once we removed the asphalt and the barrier walls – the actual walls on the bridges – we had to patch the deck itself and replace the barrier walls. The walls were cast-in-place concrete. The underpasses were rehabilitated with new expansion joints and miscellaneous deck repairs – new bearings and new approach slabs – and after that, new asphalt.”

Fischer estimates that approximately 50 percent of the work was self-performed by Thomas Cavanagh Construction. “Our work included all highway building itself, the earth excavation, the sewers, the grading and the hot-mix paving,” Fischer says.

Subcontracted was all the bridgework, the electrical work, the highway safety items and all the deep foundations that were part of the electrical and sign structures. “We installed median and interchange lighting on 30-meter-tall poles that on average had about 8-meter-deep caisson foundations,” Fischer says.

The project also required installation of an extensive sewer system. “We had 4,000 meters of sewers to install,” Fischer calculates. A sewer line that was designed to be installed approximately 20 meters from the back of residential houses up to 10 meters in depth in hard rock had to be redesigned.

“There was no room to allow the removal of the rock using conventional construction methods – blasting was not permitted,” Fischer recalls. “So we ended up moving and relocating the sewer from the outside of the highway to the median, and it became a tunnel. We used a tunnel-boring machine with a custom-built head to accommodate the specific stone conditions to bore about 450 meters of the 850 meters of sewer run through rock.”

The weather did not make coordinating the project any easier. “We’ve basically worked through every winter since the start of the project,” Fischer declares. “It’s been a wet year for us here in Ottawa. So our challenge has been to maintain our paving schedule around the rainy weather.”

Another structure that needed to be built was a cast-in-place concrete box culvert that was approximately 200 meters long. “It was quite the feat to replace an existing drainage pipe that was corroded and nearing the end of its service life,” Fischer says. “It’s essentially a creek and storm sewer that flows completely under the highway.”

Construction of some of the culvert was scheduled for winter because it could be heated under a tarp in a contained area. Casting concrete in place during winter incurs additional costs, but Fischer points out that adjustments often have to be made for unexpected developments in a project. “These types of projects are dynamic,” Fischer concludes. “You need to be able to adapt and be flexible in order to face the challenges that are encountered.”