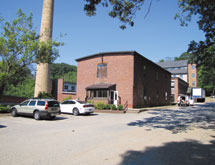 Relying heavily on the discretionary spending in the marine market during a down economy can spell trouble for any manufacturer. However, the Thomas G. Faria Corp. – an analog and digital instrumentation (with LCD and touch screen technology) manufacturer based in Uncasville, Conn. – is on a path to diversify across a variety of industries, relying on its reputation for innovative design, quality, delivery and the ability to capitalize on its status as a vertically integrated manufacturer based in the U.S.A.

“In a tough economy, people may buy from other sources based solely on price,” says David M. Hickey, president and CEO of the Thomas G. Faria Corp. since September 2011. “But people buy Faria products because we have provided innovative engineering designs, quality, and on-time delivery as American-made products for more than 50 years.

“We may lose to a competitor in China or India based solely on price, but the customer will often come back to Faria because the quality and service they’re used to is not there,” Hickey adds. “We’ve actually seen Chinese knockoffs where they even copied a nick in the mold of a plastic housing. Our customers appreciate our flexibility to provide value for money.”

Founded in 1956, Thomas G. Faria Corp. has transitioned from an electric and mechanical gauge manufacturer to an ISO:9001:2008-registered electronic hardware and software design company with in-house pick-and-place assembly lines for surface mount technology. The company manufactures instruments for marine industry OEMs, which accounts for 45 percent of its business.  Another 25 percent of sales stem from commercial and industrial OEMs, along with 20 percent for aftermarket sales and 10 percent for military OEMs. Most of the company’s products are bought in North America, but the company is expanding into new business opportunities in the international communities.

Hickey took over as president and CEO of the Thomas G. Faria Corp. when David Blackburn retired after 31 years at the helm of the company. Hickey is responsible for the turnaround of 17 international divisions, most recently serving as COO of SensorTran Inc., a worldwide leader in laser fiber optic temperature-sensing systems.

Thomas G. Faria Corp. relies heavily on the company’s 100 percent vertically integrated manufacturing and assembling capabilities. All components of its instrumentation except for nuts, bolts and glass lenses are assembled and manufactured in Connecticut. This allows the Faria the flexibility for faster turnaround, with tight quality control and ability to be price competitively, which is of particular importance in the Marine industry.

“Virtually everyone else – mostly our smaller competitors – outsource,” Hickey says. “In addition to vertical integration, we also have in-house engineering and development, allowing us to do much faster turnarounds of innovative and aesthetic designs.”

For the marine industry, those turnaround times are of the utmost importance. Hickey says the company attends dealer and boat shows throughout the United States, launching new models for the new season throughout the summer and fall. While normal lead-times for gauges range between eight and twelve weeks, our customers often require a four-week turnaround.

“We’re geared to do quick turnarounds of new designs efficiently and economically, to the point where our OEM customers depend on us to meet critical new model launch production schedules,” he says. “They recognize they’re giving us a short lead time, but it is the world we live and compete in.”

As a turnaround executive, Hickey immediately went to work on changing the culture and operations throughout Thomas G. Faria Corp., introducing the company to the efficiencies of the computer era, ushering in the coordination of existing financial systems with Microsoft Office products to streamline the flow of information and provide new tools to sales and operations.

“We’ve also instituted a system of Pareto Analysis in every area of operations,” he says. “By focusing on the 80/20 rule, which states that the large majority of problems (80 percent) are the result of a few key causes (20 percent), in order to continue making an impact on the top and bottom line.”

Faria has also shifted their strategic focus to sustaining the Marine industry, while growing global aftermarket sales and further penetration of the commercial/industrial market. Aftermarket sales can apply to al of the sectors of the business, where end-users often opt to refurbish equipment they already own instead of purchasing new assets.

There is a significant need for more industrial off-highway equipment as more government funding is spent on the rebuilding of infrastructure throughout the United States. On the commercial side, even people who can no longer afford new boats, will often opt for jet skis, snowmobiles or all-terrain vehicles to make their recreational dollar stretch a little further.

“A major factor for Faria in penetrating those markets is, capitalizing on the strong reputation we have earned in the marine market, and utilizing that reputation with the engine manufacturers who build engines for boats as well as for commercial and industrial applications,” Hickey says. “We will continue to strengthen our marine presence, while leveraging our reputation and contacts to strategically grow in the commercial, industrial and military arenas.”