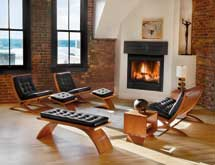 Even though Thomas Moser Cabinetmakers has grown and evolved significantly since its inception 40 years ago, one thing has not changed for the high-end, solid-wood furniture producer – its stance on quality. The pieces created by the Auburn, Maine-based company have been described as “sublime, perfect and poetic” and are revered by affluent homeowners and institutions who value superior craftsmanship.

Thomas Moser founded the Auburn, Maine-based company in 1972. At the time, he was a professor of speech communications and linguistics at Bates College. Dissatisfied with teaching, he took a one-year leave of absence to pursue his hobby of creating architectural masterpieces out of wood, and never looked back. He named his company Thos. Moser Cabinetmakers in tribute to the artisan craftsmen – known as cabinetmakers – who relied on ancient woodworking techniques to create beautiful furniture.

“Up through the mid-80s, I was committed to recapturing the way furniture was made around 1830, before the industrial revolution brought about automation,” Moser recalls. “We prided ourselves in the use of hand tools, building one piece at a time and replicating the technology that took 3,000 years to evolve. The Egyptians did woodworking similar to what was done in 1830. By the Victorian age, furniture was designed in order to be machined. In other words, the means of production caused the design, rather than design caused the means of production.”

Thos. Moser gradually moved toward 20th century technology to satisfy the demands of its growing clientele and find more efficient ways to build furniture. In 1987, it bought its first five-axis CNC machine and was one of the first companies to use that technology for carving wood. The other was the Baldwin Piano Co., according to Moser. Recognizing the enormous gains in efficiency, accuracy and safety, Thos. Moser embraced modern equipment and now has seven CNC machines and more than 50 computers.

Thos. Moser furniture is exclusively available in company-owned showrooms in Freeport, Maine; Boston; New York City; Philadelphia; Washington, D.C.; and San Francisco, with a showroom slated to open soon in Greenwich, Conn. Although the majority of its pieces are found in residences, the company began delivering library interiors for major universities across the country about 20 years ago. “It’s been a successful addition to the residential furniture,” Moser notes.

One thing that distinguishes Thos. Moser from other high-end furniture producers is its refusal to work with exotic woods imported from endangered rainforests. The company only works with American solid woods that are easily replenished, such as black cherry, walnut, maple and ash. “People who buy Thos. Moser furniture are buying a piece of American art,” Moser asserts. “Each piece is signed and dated by the person who made it. Imagine being able to sign furniture that is going to live longer than you do. We are very proud to be able to do that, and people respect it.”

Another unique trait is that Thos. Moser invites customers from across the country to come to its facilities and spend a week building their own furniture. “They come Sunday night and get room and board at a very nice inn in Maine,” Moser says. “They have a master cabinetmaker assigned to them as a mentor so that by Friday, their piece should be in the finishing room. We’ve had over 150 people do this in the last three years, and we are about 80 percent booked for 2012. It’s a great experience for them.”

For the first 30 years, Moser designed all of the company’s furniture himself. “I have a passion for things from the past, so our furniture was always adaptations or derivations of furniture from history,” he says. When his youngest son, David, joined the company 20 years ago and demonstrated his extraordinary talent for furniture design, Thos. Moser broadened its selection to appeal to a new generation of furniture enthusiasts.

“I would say that 80 percent of what we now show as new products are the work of David,” Moser says. “Like myself, he is self taught. His designs are less derivative and more inventive. I think we’re equally successful in selling traditional pieces that I’ve done and the modern, contemporary pieces that David does. I think that’s because people in their 20s and 30s are less interested in historical forms, and they are gravitating towards David’s work.”

All four of Moser’s sons have worked for the family business. His eldest son, Matt, worked for Thos. Moser for 16 years before starting his own kitchen cabinet business. The second eldest, Andrew, is responsible for the company’s warranty and repair work, which includes a lifetime guarantee. The third son, Aaron, is the sales manager responsible for corporate and institutional sales. “Aaron keeps track of all the libraries and offices that we’ve done and hope to do,” Moser notes. “We’ve been able to build this company through imagination, initiatives and mostly perspiration – a lot of hard work. My greatest satisfaction comes from knowing that we are ‘American made’ and are both proud and thankful for the patronage we’ve known. I’d like to see it go another 40 years.”