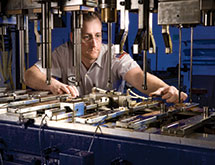 Trans-Matic Manufacturing Co.’s products are typically small and difficult to make, but the company ranks among the top-10 deep-drawn metal stamping companies in the world because of its ability to deliver those high-quality components with ease. “That’s what we do well – we produce very difficult parts,” Senior Executive of Special Projects Bob Stander says. “Trans-Matic was built upon a heritage of craftsmanship.”

The Holland, Mich.-based company began in 1968 with two used transfer presses. It began building a team of skilled toolmakers, die designers and support personnel into an effective organization during the 1970s. “We cut out our niche in the marketplace by developing a unique reputation for reliable deliveries,” the company says. “Many of our customers still refer to us as a supplier you can always count on.”