Back to Profile Gallery > Turbocam International

Part of the culture

There is no challenge that Turbocam International is not afraid to take on; with innovation and a dedicated team, the business is looking forward to a future of healthy growth

The business that began its manufacturing journey by creating prototype parts that helped put the first Boeing 777 up in the air, Turbocam International (Turbocam) has wasted no time in expanding its capabilities since we last spoke in 2017. Although it has maintained its presence in the aviation industry for the last three decades, recent developments have allowed the business to reach a critical point to diversify and take on greater projects.

“Our approach to new challenges is simple: when a program is launching, we have to be ready to move with it and ramp up faster if need be. Sometimes, it may require a lot more work than we expected, but to remain stable and steady, if possible, push ourselves ahead of the curve. You don’t get a second chance, you can’t come back in two years’ time and say, ‘we’re ready now’ because the opportunity would have been lost. This mentality is what has motivated our growth,” shares Marian Noronha, the company’s President, as he reflects on the journey that his business has undergone over the last five years.

Now, Turbocam currently processes approximately one million parts a year for the automotive industry, and each product has the capability to support a million miles of service, compared to previous ones that were failing at about 25,000 miles. Marian discusses this in reference to the new TX treatment that the company produces to better service parts for its customers. The treatment incorporates unique thermal diffusion surface transformation technologies to improve the toughness of steel, without creating brittleness.

“I am going to lay claim that over 80 percent of launches from the US include products from Turbocam, and more new entrants coming into the field are turning to us, which has been incredibly rewarding,” he adds. 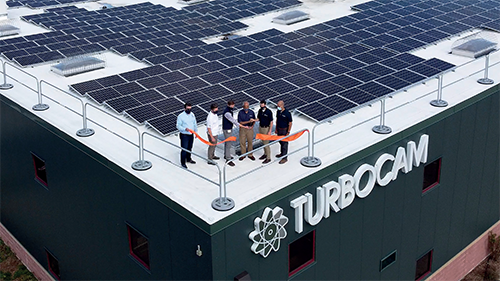 This level of innovation manifests itself in more than just the company’s products. There are a number of components to Turbocam’s own operation; sustainability and a thriving company culture being only a few. The business is determined to create a lasting and prosperous future by investing in best practices and taking care of its people. “I’m looking for folks to join and build with us. Our working facilities are meant to last and be efficient, so we take the approach of investing large amounts of money up front, and then reap the rewards in the years following that investment,” he explains, adding that energy saving measures have been one way to demonstrate this strategy.

“We put water lines under the slabs of our building in order to heat them with the waste heat that is extracted from the manufacturing processes. The building I am sitting in right now was built in 2004, and although those investments were substantial in the beginning, I have been getting free heating for the last 18 years.”

The company has also recently installed over 1500 solar panels onto its facility in Barrington; thanks to a generous subsidy, as Marian shares, that was given by the government. “We should be getting a return on investment for that over the next 40 years. However, in whatever way we can, we look to keep our technology self-funded in order for that investment to go straight back to our people.

“We also use water jets to cut metal, which, if you visit a car factory, you’ll see that the upholstery is cut to size using the same machinery. Although those are low power, what we are doing is cutting some of the hardest metals by water jets, which is a practice that is relatively new to the industry, and its working very well for us.

“In terms of sustainability regarding our life-span, advanced technology at this level means we can be competitive for a longer time, before we have to revamp again and take another look at the best, fastest and most effective way of approaching our problems. Turbocam has been refining this process fantastically over the past few years: we invest, we figure things out, we install the equipment, and then we start getting pay back,” he says.

Learning environment
This brings us to the topic of the last two years. Turbocam has had a difficult time in coping with the pandemic, and faced devastating losses as Marian had to lay off a few of his team members. However, despite this, he has seen an inspiring determination from his staff to secure the long-term success of the company. “We have a potential downturn coming as a result of the war in Ukraine, which will inflict massive changes in our supply chain and energy networks, and I think our customers are going to look ahead to figure out how this will affect them and how their customers are going to be impacted as well. This comes right after Covid-19 hit, which was also difficult. Some of our people have come back but a large amount of our people went on to redefine themselves in other industries, and we wish them all the very best.

“However, the recovery process continues to be something that we navigate; hiring people in this environment has been challenging, but I believe that slow-downs are time for R&D, training and improving. We are recovering as best we can, and our sales numbers are looking better than they were in 2019, and continue on the upswing,” Marian says.

When asked whether company culture has played a significant role in his attitude to the business’s recovering stability, Marian highlights that although the core values of the business remain unchanged, the culture itself is continually adapting to global difficulties to better serve its employees. “In one of our plants in India, over the last year they have been developing fish ponds, and I was there in January, and I got to eat the first Tilapia that had been grown in the company. It demonstrates the innovation at each of our facilities, and how they are willing to use their resources to match the needs of their team. So, we are now encouraging multiple people in the company to learn from each other, to take care of one another with what they can, and find what works best for them,” he expresses. 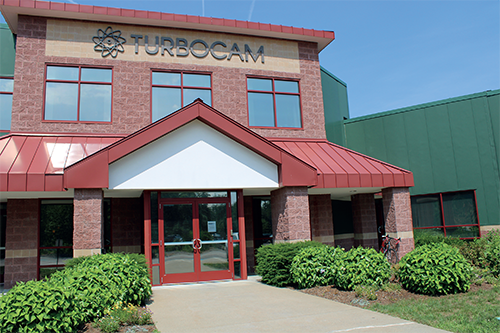 As Turbocam continues to scale up and develop its technologies further, Marian is determined to ensure that its future will be a healthy one. Our discussion of Turbocam’s success ends where it began as Marian brings the conversation to a close by highlighting the specialisms that he believes will carry the business forward. “I believe that if the company is not growing then there is probably something wrong. However, growth does not have to be measured by the amount of people we have with us, it doesn’t have to be in terms of the number of plants we have; we just need to be in a healthy position where people are pushing themselves in their careers, and seeing that their efforts are paying off.

“Overall, we have had some significant breakthrough on shrouded stationary parts for aero engines, which are extremely demanding, and we have done an excellent job in refining those processes over the last few years. We might be up to 100 percent market share on some of those products, because there is no one else that comes close to delivering that kind of quality at our prices.

“Applications like the one that we did for Boeing back in 1990 don’t require only one part anymore, we have to deliver thousands of these parts and they have to be as perfect as anything that has ever been made. Those are the big achievements that have been happening in our time since 2017, and I look forward to what we achieve in the years to come,” Marian concludes.