Back to Profile Gallery > Uniseal Inc. 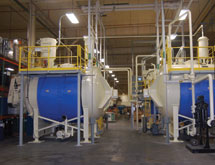 A quiet ride is the sign of a well-built vehicle, a feature Uniseal Inc. has helped original equipment manufacturers (OEMs) achieve for more than 50 years. The company, headquartered in Evansville, Ind., specializes in innovative adhesives and sealers for the transportation, agricultural and heavy equipment industries. Additionally, many of the company’s products find use in any number of industrial applications.

Randy Zahn, who is the president and the eldest son of one of the original founders of Uniseal, explains that the company’s preeminent advantage is the innovative capabilities of its research and development team.

“We have a fantastic group of chemists who are well ahead of the curve when it comes to developing new technologies,” Zahn states. “Because of this focus on innovation, Uniseal products can be utilized in any of the transportation industries and beyond.”

One of the innovative solutions the company delivered for automobile manufacturers was a hybrid epoxy used in the manufacturing of car doors. For many years, the manufacturers utilized PVC for bonding door hems.  Eventually, the industry migrated to epoxy, but the new product still had shortcomings. “The standard epoxy has a rigid component that embrittles in extreme cold,” Zahn explains. If the car is in an accident, the stress could cause the bonded joints to fail, creating a safety hazard. Uniseal developed a hybridized system that combines the strength of epoxy with the toughness of other polymers.  “The hybrid system is able to absorb a tremendous amount of energy without the bond failing,” Zahn says.

Over the past decade, legislation has increased the minimum CAFE standards, driving automotive OEMs to actively seek innovations that lead to lighter, durable vehicles that are more fuel efficient. The industry encouraged Uniseal to invest in new product developments to support their initiatives. “In the past, lean manufacturing and just-in-time objectives were prevalent, so the OEMs focused on adhesives that cured quickly,” explains Brandon Willis, director of marketing and business development.

The body shop adhesives are typically cured by the heat of the ECOAT oven, which can have temperatures in excess of 300 F.  More recently, the OEMs are seeking to lower their factories’ energy consumption and are investigating products with cure temperatures of 225 to 240 F. “The challenge is to accelerate the cure at low temperatures while maintaining a reasonable shelf life,” Zahn explains. Uniseal products commonly have an unopened shelf life of 90 to 100 days, and in some cases, in excess of six months. The Uniseal Research and Development team is working on an adhesive that will cure in a well-defined window, giving OEMs the ability to cure the product at low temperatures and avoid the deleterious effects of storage in elevated temperatures such as warehouses without temperature control.

Uniseal prides itself on developing strong bonds with its customers, working together to implement its new technologies for the betterment of both companies. The company provided a case study of one of its developments based on a major challenge one of its customers was facing with a new technology of its own.  The global automotive OEM was pioneering a new design for its vehicles: an open hem flange at the bottom of its door enclosures. This new strategy allowed the hem to receive phosphate washing and electrodeposition coating (ECOAT), which improved corrosion resistance.  The idea was so advanced that the company received a U.S. patent.

The hem was bonded and sealed by placing a pre-formed epoxy rod in the hemline after ECOAT.  The rod would melt and cure in the paint ovens.  However, the manual process of hand-placing the epoxy rods in the hemline was difficult, time-consuming and somewhat inaccurate, with rods often in the wrong place or orientation, resulting in design failures. The OEM engaged Uniseal to develop a solution to this difficult challenge.  The result: a pumpable adhesive that could be robotically applied in “drops” to the outer panel immediately after stamping (3 to 5 inches above the hem line).  After assembly and during the ECOAT bake cycle, it would melt and flow into the open hem, bonding the inner and outer panels and sealing the hemline.  Even today, Uniseal is the only adhesive company in the world to have developed such a product.

Although the company has a strong connection with the automotive industry – 95 percent of its business comes from this sector – and counts iconic automakers such as GM and Ford among its clients, it also provides solutions to other industries.

Willis says Uniseal adhesives and sealants can be applied in a number of ways. “We provide a product used for gap and hole sealing that retards heat transfer, diminishes vibration and noise, and can be used in washing machines, dishwashers, refrigerators or drink dispensers,” he says. Uniseal industrial clients include GE, Whirlpool and other manufacturers.

For agricultural implements and heavy equipment, Uniseal has a unique product used to bond and seal welded joints. The product was developed specifically for use in powder coating applications. “There is no other product like it in the industry,” Willis explains.

Uniseal has grown over the years beyond its Indiana roots and, although its headquarters and biggest manufacturing facilities are still located in Evansville, the company has expanded its operations to Shanghai, China; Rétság, Hungary; and Chennai, India, to meet the international demand for its sealants and adhesives. The company says it is investigating future moves into Brazil and Japan, and will likely expand its presence in Mexico.

Uniseal is a member of Koch Enterprises Inc., one of the largest and most distinguished privately held companies in Indiana. The company was purchased from the founders in 1985 and has grown substantially with Zahn’s leadership and Koch’s resources, it says.