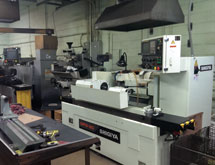 United Standard Industries Inc., Glenview, Ill., is expanding its workforce to help it win more commercial work. For most of its 47-year existence, the company had worked mainly for the U.S. Department of Defense (DOD), machining parts for the Apache and Chinook helicopters. United Standard Industries also services the automotive, food, medical and hydraulic industries, and is AS 9100:2009 and ISO 9001:2008 certified.

Despite a significant amount of DOD business, the company began changing its focus about two years ago to non-governmental work due to budget downsizing in defense, owner Sherwin Feldstein says. In the future, government work is expected to be no more than 25 percent of the company’s sales.

“We have changed our marketing philosophy to non-military,” Feldstein says. “Our objective is to do more industrial work in the medical, aerospace, hydraulic, food and beverage industries.”

Additional salespeople are being hired to implement the change of direction. “We are in a growth period right now because we have changed directions in our company to be less dependent on the government,” Feldstein says. “We are feeling very positive with the change. We are getting bigger accounts and more out-of-state accounts.”

United Standard Industries’ fully air conditioned, 38,000-square-foot plant sits on 2.2 acres of land. More than 100 machine tools, 45 computer-controlled machines, saws, mills, lathes, grinders, hones and die-cutting equipment can be found inside the plant. “We have an exceptional amount of electrical power in this plant to accommodate our equipment and we also have a special foundation that has been poured so the machines are resting on a firm base when they are operating,” Feldstein says.

Solid Works and Computer Assistance Manufacturing software systems are utilized to convert a part drawing into computer code to be manufactured. The quality control department, staffed with trained inspectors, then uses the latest inspection techniques and equipment. To ensure expectations are met, each customer is assigned a personal account executive who focuses only on that customer. “Each customer has their own specifications for their plans,” Feldstein explains. “We assign a person to the account and they handle everything – one customer at a time.”

Top-of-the-line equipment gives United Standard Industries a competitive edge. “We run lights-out on certain projects,” Feldstein says. “If you were to come in here at night, the machines would be running and no one is here.” The equipment features controls that allow it to run without human interaction. If a tool breaks, the machine senses it and replaces the tool. Each machine that operates using oil has its own fire suppression system. “These are the kinds of equipment we have – the upper echelon,” Feldstein says. “We have terrific capability with this equipment.”

Within two years, Feldstein plans to acquire a second plant in Illinois to complement its current plant in Glenview. A majority of the company’s accounts are outside of its home state but Feinstein explains there is no need to open plants around the country. Technology makes the plant location moot by allowing quick transmittal of information. “With modern communication, with email, we are able to send manufacturing files to customers and it makes it like the people are next door to you,” he says. “We employ a great deal of sophistication in manufacturing.”

Expanding in physical size means increasing the workforce. United Standard Industries currently has numerous long-term employees, but also has a training program in place for all incoming employees. The training program teaches new employees how to run the machine they will be operating, use measuring instruments and how to load and unload parts.

Planning for increased business, the company continues to market chiefly through word-of-mouth. Companies that have worked with United Standard Industries tend to remember the work that was performed and become repeat customers, Feldstein maintains. For new accounts, its salespeople travel around the country to spread the word, which has been successful because a number of new companies are placing “starter” orders.

These companies approve of the work performed as they are now ordering on a regular basis, Feldstein notes. “We are where we want to be,” he explains. “We would like to be there faster of course, but we are on target.”