Back to Profile Gallery > Universal Robots

The future is now

Flexible, safe and easy-to-use Universal Robots’ collaborative robot technology is helping to give businesses greater control over their manufacturing activities than ever before

Robots supplanting humans across all walks of life. What was once seen as the possible premise of a science fiction novel has gained in credence as technology has evolved and automation has found its way into the world of manufacturing. For some, the threat posed by robots and automated systems to human labour in factories and workplaces is very real, however there are 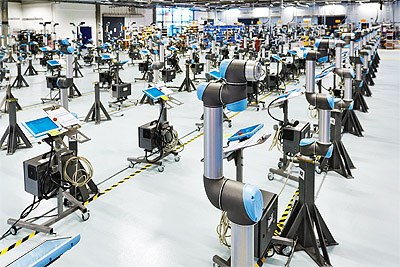 lots of people within the manufacturing sector that see the relationship between man and machine as being far more positive.

“The introduction and embracing of automation and robotics does not have to be about replacing people, rather it should be about channelling human efforts towards tasks and areas of business where they have greater expertise,”states ChiefTechnical Officer and co-founder of Universal Robots, Esben Østergaard. “Where people’s true talent lies is not in continuously inserting screws or bolts into things, but in our ability to understand our customers’ needs, to identify where improvements are needed, in optimising processes and in knowing what does, and does not, work in a factory environment.What we have always strived to do is create automated solutions that act as tools that users can programme to carry out those repetitive tasks that require consistent quality, while the company in question retains the knowledge and expertise of its people on the factory floor. When we witness this process playing out in real time, the result is that it invariably leads to business growth and therefore the hiring of more pe ple.”

Established in 2005 by Esben, Kasper Støy and Kristian Kassow, Universal Robots came about as a result of a desire to make robot technology accessible to small and medium-sized enterprises.The company’s response to this was the development of cost-effective, safe and flexible-to-deploy collaborative robots, or ‘cobots’.These cobots offer access to all the benefits of advanced robotic automation, with none of the extra costs associated with traditional robot programming and set up, and Universal Robots’ creations are today used in more than 21,000 production environments every day.

Following on from a very successful 2016, during which it experienced growth totaling approximately 60 per cent, Universal Robots went on to enjoy a prosperous 2017, achieving sales exceeding $470 million, which in itself represents growth of 72 per cent. A key by-product of this is that the company now employs close to 500 people across its 22 offices in 15 different countries.

“We have been very successful in recent times when it comes to opening up new markets for our robots to operate within,” Esben continues.“As well as the metal work industries that continue to represent much of our sales, we are also seeing healthy uptake in the automotive market and an increase in interest from a number of non-industry players such as construction sites, hospitals and rehabilitation centres, and even television studios, all of which have a need for the type of repetitive motion tasks, safety elements and ease of programming functions that our robots can provide.”

As well as recording an impressive increase in sales figures, Universal Robots spent much of 2017 making significant technical advances to both its systems and services. In addition to releasing several important software features, the company has also been perfecting its UR+ ecosystem and facilitating the growth of its online academy.The former is an online showroom that provides cutting-edge products from developers to customise a Universal Robots robot application to meet ones’ requirements. All of these products are tested and approved to perfectly 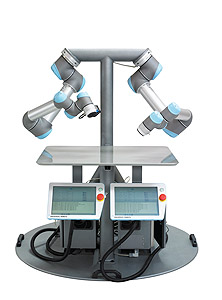 The UR+ ecosystem is helping to create an environment around the company’s robots that facilitates the development of new technology by approved third party companies for the ultimate benefit of the end user. Being part of the ecosystem allows a company to announce itself as being UR+ certified, an example of which is Roboworld, developers of custom manufactured, fitted protective suits for robots. Its Robosuit product covers the full range of Universal Robots arms, protecting them from extremes in temperature, sharp metal turnings, fluids and coolants, and particulate.

“Roboworld is a good example of the type of company that features within the UR+ ecosystem, in that it offers industry leading products,” Esben says.“This ecosystem has been incredibly important as a number of these companies perhaps were a bit lacking in terms of a sales channel previously.What we are now able to do is offer an online package that brings together the best protective suits makers, the best sensors, the best connectivity providers, and present them in a user-friendly way that delivers much needed service to global customers.”

With a desire to capitalise on the success it experienced in 2017, Universal Robots is committed to maintaining its position as the leader in its field of robotics, and to achieve this it continues to invest strongly in R&D, innovation and expansion.“We have ambitious plans to achieve growth of at least 50 per cent year-on-year, something that we definitely have the capacity to make a reality,” Esben reveals. “We know that the opportunities are out there, which is why we have been busy planting seeds all over the world in recent times.”

As Esben goes on to explain, central to these growth plans will be helping more and more people on factory floors to see the company’s systems as not simply robots, but as tools that can assist with integration.This thought process, he believes, is the basis for the future of manufacturing.“The factory floor, and the people who work there, has long been the source of much of a manufacturer’s value over the years, and we want to help to create an environment where people’s creativity, knowledge and expertise can be channelled in order to revolutionise the factory environment.

“One way of achieving this is having robots in place to take on the monotonous, quality-consistent tasks, thus freeing up human labour to focus their creativity towards efficiencies, innovation and problem solving. By combining the flexibility of automation with human knowledge, we are increasing value on the factory floor, which is resulting in companies becoming more successful and profitable in the process.This is why we are confident that we are onto something special here that will change manufacturing for the better in the years to come.”