For a good many years the companies Hamilton Sundstrand and Goodrich were recognized as being industry leaders in the aerospace industry. It was the combining of these two businesses in 2012 that resulted in the formation of UTC Aerospace Systems. One of the world’s largest suppliers of technologically advanced aerospace and defense products, it designs, manufactures 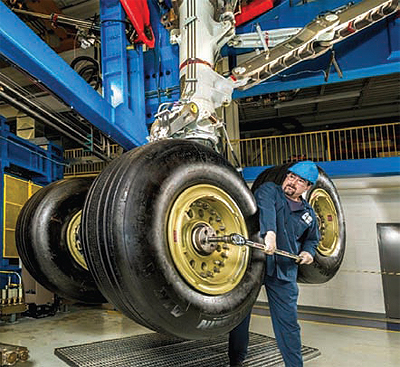 and services systems and components, and provides integrated solutions for commercial, regional, business and military aircraft, helicopters and other platforms. It also provides substantial content to UAV’s, satellites, and ground and naval vehicles.

“UTC’s aerospace lineage can be traced as far back as 1909 when Goodrich entered the aircraft industry with airplane tires, equipping many of the first planes ever built,” begins Tim Whittier, UTC Aerospace Systems’ Director of Government Relations – Landing Systems. “Following the formation of UTC Aerospace Systems, a series of internal integration activities was undertaken over the intervening years that have resulted in the current corporate structure that comprises six different business units. Landing Systems was established in early 2014 following the integration of the organization’s wheel and brake product line and the landing gear line.”

Having built a reputation for performance and innovation, UTC Aerospace Systems’ landing gear business is one of the largest suppliers of integrated systems in the world, outfitting aircraft from most of the world’s major airframers. Principal product offerings comprise the main and nose landing gear structures, and also include complementary control systems that govern the operation of the entire landing system, from the cockpit controls to the wheels, brakes and tires.

Unique skillset
UTC Aerospace Systems is a global leader when it comes to large multi-wheel bogie-type landing gear which are typical of the type outfitted on the Airbus A380 and now on the A350-1000 aircraft that is currently in the midst of flight testing. “Our two biggest customers are Boeing and Airbus,” adds Randy Corey, General Manager for UTC’s North American Landing Gear Operations. “Currently, we are in the process of developing the main landing gears for the A350-1000, while at the same time we continue to support the Boeing family of aircraft by providing equipment for the 737MAX, 747-8, the 767 & KC-46, as well as the Airbus A380.”

“Ironically enough, one of the qualities of the business which sometimes gets overlooked is our commitment to advancing our manufacturing proficiency, together with our ability to leverage the latest technologies to both expand our capabilities and improve productivity on the shop floor,” Tim continues. “This is an area where we have made significant gains over the years and some of the equipment we now use in the manufacture of some of the very large components that we produce really does speak volumes about, what I would describe as, the very unique skillset we possess. We have also been able to harness the capabilities of our advanced machining equipment and leverage them across multiple platforms so that they are not dedicated to supporting a single program. This highlights the flexibility we promote on the shop floor, which allows us to be more efficient and better able to respond to changes in production rates.”

Increased agility
As Randy points out, as the business has expanded over the years, so too have its efforts to vertically integrate its processes and procedures. “One of the critical aspects of our business is that some of our processes may take several months between the start of machining and the shipping of the finished component. The last thing you want to find out in the last few weeks of 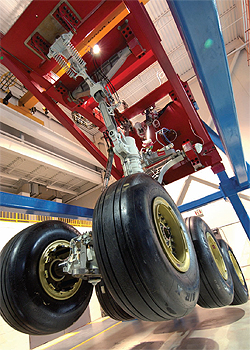 operations is that something actually went wrong in the first couple of days as any delay ultimately impacts on delivery, the timing of which is one of our customers’ primary concerns. What we have done to countenance this is vertically integrate the manufacturing flow from start to finish, so that we can react to any issues immediately and provide a real-time response. We refer to this as ‘Real-Time Problem Resolution’.”

“Bringing some of our processes in-house has provided a great many advantages, both in terms of control over the deployment of our own resources and the level of responsiveness we can offer our customers when it comes to their production schedules,” Tim enthuses. “In the past, we were somewhat at the mercy of the manufacturing schedule of our supply chain, which can extend overall lead times. Today, however, we have an increased level of agility, which also allows us to exert a higher level of quality control across the board.”

One of the phrases Randy uses to describe the business in which he and Tim operate is a ‘just-in-time environment’. “By the time our customer receives their finished landing gear, which is typically delivered directly to the aircraft on the production line, it is often installed on the aircraft within a matter of hours,” he says. “This is why it is absolutely critical that our delivery matches the cadence of our customer’s production schedule. With many airframers increasing their production rates in recent years, expectations have also risen and that has been a key area of improvement for us in recent years.”

“We have spent a good deal of time focusing on the most efficient and cost effective way to machine and assemble landing gear,” Tim concludes. “Not only does this allow us to better meet the cost expectations of our customers, it has also resulted in the reduction of our manufacturing lead times. Where, traditionally, lead times for landing gear would average two years, we are now able to bring this down to a year, or lower in some instances. These are not, as you might say, ‘sexy’ things that necessarily get much attention, but they are fundamental to improving the competitiveness of our business and are key attributes that our customers look for when they are selecting their next landing gear provider. As in any other industry, the customer is never fully satisfied, and while levels of competition continue to increase, it is important for us to do what we have always done, and that is stay ahead of the curve.”