Back to Profile Gallery > UVP LLC 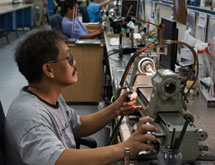 Some firms outsource their manufacturing, but UVP LLC successfully does it all on its own, President and CEO Leighton Smith says.

“We feel we have the advantage when it comes to quality control, timely delivery of products to our customers and accelerated new product development,” he declares.

Today, UVP serves its clients through a worldwide dealer network and a team of sales and technical specialists through its U.S. locations and a subsidiary in Cambridge, United Kingdom. Primarily, Smith says, the firm serves a customer base that uses its products for scientific purposes.

“They demand high-quality instruments that produce accurate data and must be easy to use,” he says. “They need instruments and equipment that can stand the rigor of being placed in laboratory environments with multiple users of varying skills.”

Its clients also include industrial customers, such as windshield repair companies, Smith says. “We sell ultraviolet lamps that are used in a kit for windshield curing,” he says, explaining that the kit is used to repair holes and cracks in windshields.

UVP Pride
Smith is a longtime employee of UVP. Before joining the company in 1993, he was the CFO at Delta Perspective Inc., a distributor and systems integrator of scientific instrumentation for environmental laboratories.

When Smith came to UVP, he took the same role, before eventually becoming its president and CEO. One accomplishment that brings him immense pride is the company’s ISO 9001: 2008 certification.

“It was a big effort, but it paid big dividends,” he recalls. “We’ve always been customer and quality focused, but the steps we took to implement our QMS have made us an even better company.”

He also is proud of how the firm has made manufacturing a core competence, while many other life science tools firms will hire overseas manufacturers. “To remain competitive, we leverage our global supply chain to reduce costs while maintaining control of the manufacturing process here in Upland,” he says.

In addition, the company can better maintain quality and customize its services. “We can quickly develop and produce new products,” he says. “That’s given us an advantage.”

But, he notes, UVP is not the only one who has benefits. “By keeping the manufacturing here in Upland, we are keeping good manufacturing jobs here in our community,” he describes. “That and the fact that we manufacture products that are helping researchers discover cures for cancer and other diseases make me very proud to be a part of UVP.”

Winning Combinations
During its history, UVP was the first company to develop a digital imaging system to look at DNA and proteins, Smith says. “Prior to that, life science researchers were using film cameras to acquire images,” he says. “We combined UV technology with CCD technology to create the first Bioimaging systems.”

Since then, the company’s imaging systems have become more sophisticated, but with simpler operating systems. These include the ChemiDoc-It TS2 and BioDoc-It TS2 imagers, which integrate touch screen software into their user interfaces.

In addition, the company has just released the GelMax imager, which is designed to image precast or mini gels. “We’re partnering with our dealers who carry those types of gels,” he says. “We’ve targeted several of them at the moment.”

A Lean Journey
Although UVP has achieved success as a manufacturer, the company has not stopped looking for ways that it can improve. This includes the implementation of lean manufacturing initiatives, which Smith credits to Vice President of Manufacturing Barry Rhodes.

UVP started its lean journey five years ago, Rhodes says. “We implemented as many lean concepts as we could,” he recalls, noting that this included a point-of-use inventory system. “Prior to that, like many companies, we had a central inventory stock room.”

”Through point-of-use inventory and lean manufacturing cells, we gained productivity and shifted resources,” he says, adding that the firm also has given its workers 5S training.

“We also introduced [several] of the Kanban inventory control [methods],” he continues. “We try to keep our inventory flow to a just-in-time approach.”

Excited for the Future
Smith predicts a strong future for UVP. “Fluorescence imaging will continue to be an important tool in ongoing research focused on discovering cures for cancer and other diseases,” he says. “We will continue pioneering imaging systems that will enable this research as new applications for in vitro and in vivo imaging evolve. We have an extremely creative development team at UVP and a very exciting new product pipeline for the future.”