Back to Profile Gallery > Vantage Plastics 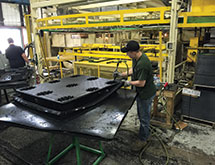 Being a vertically integrated thermoformer enables Vantage Plastics to create innovative products for its customers. “We do not depend on off-site suppliers’ timelines to supply our needs in extruded sheet,” President Paul Aultman insists. “We buy the resin that we use, which allows our customers more value and us some margin opportunity vs. buying the sheets from an outside source. This allows the flexibility of coming up with your own products and controlling them.”

One example of a product that is exclusive to Vantage Plastics is a compound called VanTech. It is coextruded on preproduction flat sheet by Vantage’s sister company, Airpark Plastics LLC. Subsequent products such as trays have the shape of a component molded into them and are used to package components and assemblies for transport to production lines.

Some of the transported components, such as automobile transmissions, may have sharp edges which would normally chafe the plastic, creating debris. This debris could cause significant issues downstream. Van-Tech prevents this longstanding issue in a very cost-efficient and effective manner. Ensuring that components are delivered undamaged to the assembly line is the task of the thermoformed packaging designed and manufactured by Vantage Plastics.

“We worked with a local compounder to come up with VanTech, which is a unique blend of materials exclusive to us,” Aultman explains. “We can coextrude it to a sheet. It reduces the amount of chafing of plastic material particles that might get into the component. That was a huge thing for us. Having this as a proprietary compound helps us control chafing and provide a cost-effective, solution-based product for our customers. We’re a very solution-driven company.”

Alternatively, urethane inserts are placed in the trays. “You manually put the inserts in between the tray and the product that goes into the tray,” Aultman says. “It requires a lot of labor and cost, because these get attached by putting a hole in the tray and putting an insert in there. So you create the same debris you don’t want as you drill the hole in the tray.”

VanTech plastic can be coextruded on both sides of a tray like a sandwich, on top of another layer of plastic or it can be applied with adhesive in different places on a tray in the shape of buttons or strips. “VanTech is compatible with the tray material,” Aultman adds. “It can be ground up and reused to produce new products without contaminating the base materials. Urethane inserts have to be removed from trays before they can be recycled or you create contamination and compatibility issues.”

Besides assembly trays, Vantage Plastics also thermoforms interior auto body components and underbody panels on consumer vehicles and light trucks for protective shielding from flying debris. Aultman estimates that up to 55 percent of the company’s volume is for the automotive market. The company has diversified into production of pallets and recreational products, such as small swimming pools for children and bases for ice fishing sleds.

The next largest market for Vantage Plastics after automotive is material-handling products, such as pallets. “We have a variety of standard plastic pallet tooling, and we can sell to many different industry segments,” Aultman points out. The pallets can be reused and then returned to Vantage Plastics and recycled at the end of their useful lifetimes.

Vantage Plastics is adding 36,000 square feet to its manufacturing space, due to be completed this spring, at its headquarters in Standish, Mich. This will bring total operational space to more than 170,000 square feet. Extrusion lines will be housed within this new addition, including a new line that can produce a 120-inch wide sheet. The new machine will join three other extruders that can produce enough raw plastic sheet to feed the company’s 12 thermoforming machines. Since one of these thermoforming machines is among the largest in the world, and features a 10-foot by 20-foot platen, a full spectrum of products can be produced. This also provides the capacity to handle high-volume production jobs.

That large machine can form a single large part or several smaller parts in quantity. “If somebody wants a million pieces of a pallet, we might make six tools and put all six tools in there to maximize the throughput and delivery time for the customer,” Aultman says. The company also uses robotics and CNC equipment in its manufacturing operations.

The company’s products are distributed internationally. “We have a number of customers that are in Canada and Mexico,” Aultman says. “We ship to Europe, and we’ve got customers that are based in the Netherlands. However, with the focal point of the auto arena still in the metro area of Detroit, it is still a good, solid base.”

Vantage Plastics’ diversification into non-automotive industries was motivated by the Great Recession. “We have over 400 customers, and I would say out of the top 10, five or six are non-automotive,” Aultman calculates.

He attributes the company’s success to its hard-working employees and to his being a person of faith. “We were one of the ones that survived, but literally by a thread,” Aultman recalls. “It was a very tough time. I attribute our success to the dedication of the people here. We got way more efficient and reduced our scrap rates. We really learned a lot about ourselves and made some dynamic improvements. We did a lot of training during that time and are a lot better company today for that.”