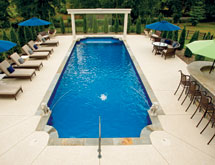 When it comes to outdoor recreation during the blazing summer months, taking a dip in family pool is at the forefront of revelers’ minds. What is often ignored, however, is the upkeep and maintenance required to keep pools clean for use all summer long.

Viking Pools LLC is championing the use of fiberglass pools over similar products, and consumers are beginning to see the light. President Tom Straub says its American-made fiberglass pools are clean, efficient and won’t eat up invaluable hours of summertime fun with maintenance needs.

“It is very clean, very efficient when you run the equipment and it is a one-and-done product,” Straub says. “It is designed to be in the ground for your lifetime. You don’t have the maintenance of replacing liners or re-plastering like you have with vinyl or gunite pools.

“Most consumers are busy and have plenty to do that’s not spending time in the backyard cleaning and maintaining a pool,” Straub adds. “So, fiberglass offers the benefit of longevity because you spend a lot less time cleaning it.”

Viking Pools LLC was founded as a family business in the mid-1970s in Redding, Calif. Founder Alan Stahl originally worked as a pool builder using fiberglass from a manufacturer. He determined he could manufacture fiberglass pools himself, so he and a partner launched their own fabrication company.

Like countless small startups, Viking Pools benefitted from relatives from all sides of the family getting involved early on. However, Straub says, the company took off when pool builders in Northern California signed on as part of a dealership network.

In the late ’80s, Stahl retired and his son, Todd, took over as president. Todd Stahl began expanding the company geographically, starting with the opening of an additional factory in Midland, Texas – just in time to profit from the economic boom in the early ’90s.

The company then licensed a manufacturer in Florida to assist with expansion and then built a new facility in Jane Lew, W.Va., where Viking Pools moved its headquarters in the early 2000s because of the booming fiberglass pool market along the Eastern Seaboard.

The company also launched facilities along the West Coast during that time. Viking Pools since has opened new facilities in Zephyrhills, Fla., and Rockingham, N.C.

Today, Viking Pools operates eight manufacturing facilities throughout the United States and Canada, which is one of the strategies that make Viking Pools stand out from the competition.

Strategically Located
To establish greater control of deliveries and overall quality, Viking Pools expanded its fleet of company owned truck and pilot cars and began to deliver its own products last year. The initiative began in July 2011, and the company started to hire people throughout the country to drive tractor-trailers customized to carry Viking Pools’ fiberglass pools of all shapes and sizes.

Its fleet of about 50 trucks and about 100 trailers is continuously shuttling products and materials among all of its facilities.

“We’ve been implementing programs whereby we’re manufacturing different products in different locations to utilize trucks that leave full and return delivering products all the way to us instead of being empty,” Straub says. “That is a huge financial windfall for us.”

Adding its own delivery services was of particular importance because many third-party freight haulers aren’t capable of handling Viking Pools’ products.

“It makes more sense to have people on staff that can assist with delivery and removal of a pool instead of just setting it in a hole in a homeowner’s backyard,” Straub says.

Despite the healthy demand for fiberglass pools, the industry is consolidating among a few large companies, Viking Pools among them. Viking, however, is four or five times larger than its next closest competitor, according to Straub, so it can acquire companies at a faster rate than other firms.

“We have the ability as a nimble company to move fairly quickly if an acquisition meets our criteria of geography as well as the customer base and financial wherewithal,” Straub says. “We can move very quickly, if needed.”

Although business is booming, the pool industry remains a seasonal market, but Viking Pools has stayed strong. Because 2011 was such a good year, Straub says Viking Pools reorganized its manufacturing operations to utilize its employee base year-round to minimize avoid seasonal hiring and layoffs.

“Everybody wants to be swimming by open on Memorial Day, and then the next giant spike is around Independence Day,” Straub says. “With our work force historically scaled back in the off season, we anticipated we would be behind demand in a position if the market continued on the path of growth To do what the market continued to do. Those crunches would be a real bottleneck for our charter service, costing us overtime and disappointed customers which would cost overtime. That would not bode well for us.”

Before this year’s busy season, Viking Pools prebuilt a number of specific models starting in January to meet the demand forecasted for the spring and summer. This allowed the company to keep its 450 people employed longer, with a temporary layoff only between Thanksgiving and Christmas.

“They got the benefit of employment, Viking got the benefit of reduced cost per pool versus our costs, and when the warm weather hit across the U.S. and Canada, not only was it a big hit, but it exploded,” Straub says. Through July June 2012, sales were up by almost 35 to 40 percent.