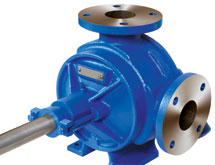 It takes a lot for a company to make it to the century mark, and Viking Pump has made it clear that it has what it takes to do so. Since 1911, the company has been a leading force in the market for rotary positive displacement pumps, and Director of Operations Gordon Davis says that’s because the company is recognized as an innovator as well as a reliable provider of equipment customers need.

“I believe we’re adding value to our customers by the performance that we’re offering them as well as the products from a quality and functionality standpoint,” Davis says.

The company’s early success was built on the invention of the rotary internal gear pump by Danish immigrant Jens Nielsen in 1904. According to the company, Nielsen was operating a limestone quarry in Cedar Falls, Iowa, at the time and required a solution for water seepage. He developed the rotary internal gear pump to help drain the quarry, and patented his design that same year. In 1911, Nielsen partnered with P.C. Petersen, W.L. Hearst and George Wyth to form Viking Pump, so named because of the Danish heritage of the founders as well as the connection between Viking explorers and the innovative nature of Nielsen’s creation.

Viking Pump operates as a subsidiary of IDEX Corp., a global leader in positive displacement pumps and other equipment. The company partners with a network of independently owned distributors that source pumps to a range of markets, including the agricultural, water treatment, pharmaceutical and petroleum sectors.

As one of the oldest and most accomplished pump manufacturers in the industry, Viking Pump brings a number of competitive advantages to the table. “The first one is our 103 years of experience,” Davis says. “All of that experience as it builds day after day is the thing that sets us apart.”

Of course, the fact that Viking Pump pioneered the rotary internal gear pump gives it a wealth of experience with those products, but its expertise doesn’t end there. The company also builds external gear pumps, rotary vane pumps, industrial lobe pumps and related accessories.

Davis says the experience and expertise that Viking Pump has in all of those product categories is the true value it provides for its customers, and that experience carries through its independent distributor network, as well. It’s because the company and its distributors have this knowledge base that it can provide customers with exceptional service after the sale. “It’s not just the pump, but it’s also how we take care of you after the sale,” Davis says.

Even at more than 100 years old, Viking Pump continues to seek out ways to improve its manufacturing processes and its products. Davis says the extremely tight nature of the competition in the industry makes these efforts absolutely essential. “If you’re not growing, you’re essentially dying,” he says.

One of the biggest recent initiatives the company has undertaken is instituting lean principles throughout its manufacturing operations. Davis says the company recently started a lean journey focused on eliminating waste in every point along its supply chain. Although the implementation is only in its preliminary stages, Davis says Viking Pump sees significant benefit for its customers in the future as a result. “It is a focus on ensuring that we’re creating velocity, which creates value to our end-customer,” he says. “It’s a continuous journey of how we continue to get better.”

Continuous improvement is a necessity in today’s marketplace, Davis adds, as external pressure from global competitors increases the need for Viking Pump to provide the best possible value to its customers. Those customers are feeling the pressure as well, prompting many of them to approach Viking Pump directly rather than purchasing products through a distributor. Davis says the company is looking for ways to meet the needs of customers that prefer to work directly with Viking Pump.

Partnering with end-customers directly is the biggest trend Viking Pump is seeing in the industry today, Davis says, and the company is committed to being there for them as their needs change with the market. As long as it continues to focus on delivering solutions to its customers’ fluid pumping needs by releasing products that are ahead of the competition, Davis says, Viking Pump should continue to be on the leading-edge of the pump industry.