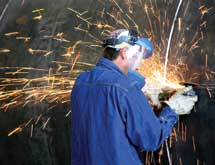 All of W. Soule & Company’s customers are 24-hour-a-day, seven-day-a-week manufacturers serving the food and beverage, chemical, pharmaceutical and industrial markets; when they need something, they need it right away. Vice President and COO Robert Mathisen says customers will often come to the company in the middle of the night looking for a solution to an emergency problem. However, that doesn’t mean customers turn to W. Soule & Company because it’s their only option at that time of night. On the contrary, W. Soule & Company has become a trusted name in industrial fabricating and contracting because of the quality of the work and responsiveness.

Based in Kalamazoo, Mich., W. Soule & Company provides a full range of industrial contracting services, including fabrication, installation, maintenance and plant shutdowns. Since 1946, when the company was founded by Thomas R. Soule as a small residential plumbing contractor, the company has grown to meet the needs of its customers. When Thomas Soule’s son, Warren, took over the company and incorporated in 1966, it began diversifying its services but remained focused on its core values of safety, quality and cost-effectiveness, the company says.

Mathisen says those values have served the company well over its 64-year history and helped to attain the position of trust it has in the industry today. “I think it comes down to the quality we provide and the service we provide our customers,” he says.

One of the primary reasons why W. Soule & Company has been so successful in meeting the needs of its customers is because it has never stopped striving for perfection, Mathisen says. “One of the things we’ve done over the years is we’ve continued to invest in the business,” he says.

One of the most recent examples of this investment is the 65,000-square-foot fabrication facility the company opened in Kalamazoo in 2007. Mathisen says the facility was built to accommodate some large custom fabrication projects the company was awarded in the ethanol industry. When the alternative energy market began to slow down, the company leveraged the facilities lean manufacturing principles, large craning capacity and unique floor space to win projects that were custom, quick ship and quality critical.

W. Soule & Company has been ahead of the curve in many respects as it enhances services to better

meet industry demands. For example, design/build has become increasingly more prevalent in the construction industry. Many engineering and construction firms are turning to the design/build model and using contractors and fabricators to help in the front-end engineering process. The purpose of this approach is to construct facilities more quickly and cost-effectively. W. Soule & Company was offering design/build solutions long before the concept became common practice. At the time, the company did not call the business model design/build, but that is essentially its approach to the market, Mathisen says. The company’s engineering partners offer the design expertise and its people offer the field experience of “knowing what works.” This approach to upgrade or new construction projects has been an asset to customers for a long time.

Many of the company’s recent improvements have been prompted by the economy, Mathisen says. Because many of the company’s customers have experienced downturns in the last few years, W. Soule has stepped up its efforts and adjusted to the changes. “What we are doing is continuing to stress the needs for quality workmanship and a high degree of customer service,” he says. “Our customers rely on somebody who can keep their facilities up and running as much as possible.”

W. Soule also is working on becoming greener, Mathisen says. “Within the past year, we have implemented a sustainability steering committee,” he says. Consisting of 11 employees from various roles within the company, the committee meets monthly to discuss green, cost-saving measures the company can implement. For example, Mathisen says, the company is investigating how it can stagger work shifts to keep all of its equipment from running during peak electric usage hours, when electricity is the most expensive. “It’s not only driving energy savings, but it’s also driving cost savings for the company,” Mathisen says.

The drive toward sustainability will be one of the most significant factors impacting the industry over the next few years. Mathisen says many of W. Soule & Company’s customers in the food industry are using less packaging, which means changing its production lines for new equipment.

Through it all, Mathisen says W. Soule & Company’s success depends on much more than its diversification. “We feel we have the best em­ployees in the region,” he says.