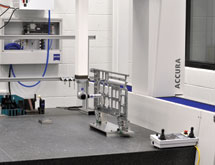 Watry Industries LLC has occupied the exact same facility since its inception in 1959, but it’s far from the same place it was back then. Sales Manager Wayne Bennin says the Sheboygan, Wis.-based aluminum cast foundry has one of the most modern facilities in the industry today, incorporating significant amounts of automation and integrated services. With the ability to provide so many services to its customers as it makes permanent and semi-permanent castings, Watry Industries is on the right track for continued success.

Bennin explains the company’s in-house capabilities and advanced equipment has helped it become a trusted partner for major companies including General Electric and IBM. Watry Industries has the ability to handle castings that many foundries are not able to. “The main focus of our market is typically large castings with quite a bit of machining and powder coating,” Bennin says.

The competition Watry Industries faces in this arena is varied, with fewer foundries capable of handling the larger castings it specializes in but many more competitors capable of smaller castings. Even though the company has its share of competition and the added challenge of overseas manufacturing drawing away business, Watry Industries has the pieces in place and has remained very busy over the last several years.

Bennin says the biggest weapon Watry Industries has in its arsenal is the fact that it provides customers with the option to have multiple services provided under the same roof. “I think the main thing is single-source responsibility,” he says, adding that the company rarely utilizes outside subcontractors.

The company’s in-house capabilities range beyond casting, and include precision CNC machining, powder coating, assembly and heat treatment. Bennin says the company’s turnkey solutions also include lots of assistance to customers on the design side. He says that although the company knows a lot about casting, the customers know a lot more about the specific machine those components will be used for, and close collaboration ensures that the finished products with work together smoothly.

“We actively engage customers at the engineering level to review designs and review prints,” Bennin says.

The capabilities Watry Industries brings to the design and conceptual stages are backed up by the company’s manufacturing and machining capabilities. Bennin says the company’s 272,000-square-foot facility features 19 melting furnaces and more than 40 casting machines.

What further distinguishes Watry Industries’ equipment from its competitors’ is the fact that much of it can run without human help and with extreme precision. “We’re very automated on the foundry side as well as on the trimming side,” Bennin says, adding that the company’s automation means reduced production time on larger components and less damage caused by handling. “The foundry automation is something that a lot of our competitors don’t have.”

Recently, the company added new robot grinding cells that also do some sawing. President Jason Dannenberg also says new modeling software has made it easier for Watry Industries to create better molds and consequently better components. The software allows the company and the customer to receive a predictive model of the component without the need to manufacture a prototype first, according to Dannenberg.

Although Watry Industries has been busy lately, Bennin says the company still has some real challenges to work through. “Our biggest challenge is the threat of a lot of foreign competition,” he says.

That is coupled with the trend that many manufacturers are moving away from vertical integration and outsourcing more of their casting and assembly. Bennin says more and more customers are looking to buy finished castings rather than their own casting machines, becoming more assemblers than manufacturers.

This means offering the best value for the dollar is what distinguishes a foundry like Watry Industries, according to Dannenberg. “Quality and delivery are assumed, price is the differentiator,” he says. “Price is what sets you apart sometimes.”

With the company’s ability to provide multiple services under one roof, Dannenberg says Watry Industries has reason to be optimistic as customers look for partners who can be a single source for their casting and machining needs. Bennin says the company is expecting to grow about 10 percent annually for the near future, and recently renewed its ISO 9001:2008 certification. As more manufacturers bring their operations back to North America from overseas, Watry Industries expects the coming years to be among its best. mt