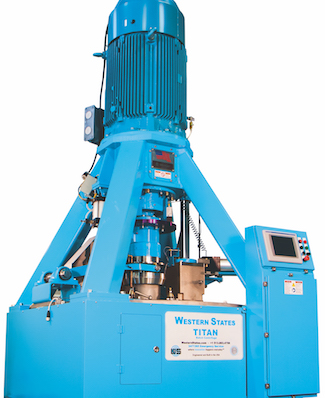 “We are very proud that we have been able to survive and prosper as a made-in-America manufacturer,” CEO and President Bob Sinnard says. “That is something I take a lot of pride in. It wasn’t easy, but we’ve stuck by our principles of serving our customers.”

The company considers its customers to be not just the people buying and receiving its equipment, but those who are using it every day. “We know exactly who our customers are, and everything we do here is focused on satisfying them,” he adds.

The company’s inventory includes parts for machines that are decades old. “We never obsolete a machine,” Sinnard says. “We have more machines that are 50 or more years old that still have parts for. Our customers know that if they buy a machine from us, it will stay running for as long as they want.”

Western States Machine closely watches its inventory levels to prevent waste, and bases its part levels on demand and historical data. “Making sure we have inventory that our customers want is something we monitor on a constant basis,” he adds. “When you have a history as long as ours, it’s easy to track the number of parts that come through here in the course of a year.”

Western States Machine today sells machines to 35 countries. A large percentage of its business comes from the sugar industry, for which it manufactures both batch and continuous centrifuges used in processing. The most common application of these machines is the separation of sugar crystals from massecuite, a thick black liquid created after sugar cane and sugar beets are ground up and crystalized.

Sugar industry customers depend on Western States Machine’s equipment to function smoothly during production campaigns. “Once the cane is cut, producers only have a certain amount of time to process it, so they work 24/7 during a campaign,” Sinnard says. “If a machine breaks down, our customers are in deep trouble, so we make sure that doesn’t happen.”

Western States Machine also designs and manufactures filtering and decanting centrifuges used to separate liquids from solids in other industries including the chemical and pharmaceutical markets.

The company produces centrifuges in a factory in Fairfield it opened four years ago. Its manufacturing capabilities include assembling machines from components provided by a number of vendors. Cutting, welding, machining and electrical wiring are also performed in the factory.

All of Western States Machine’s centrifuges are closely inspected and tested. “We test each machine for process quality,” Sinnard says. “Quality is the No. 1 priority for us – we were founded to solve customer problems, and quality is where you start.”

Western States Machine last year opened an additional facility in Brazil after establishing a joint venture with a local manufacturer. The venture returns the company to the market, from which it has been absent for several decades as a result of high government import duties. “Because of that, the country is basically closed to companies not producing inside of Brazil,” Sinnard says, noting the company needed the local partnership in order to produce machines for that market. Machines produced in the facility will be rolled out this summer.

Brazil is a significant producer and exporter of sugar globally. “If you were to take the rest of our markets and add them all together, the sum would be just a little larger than Brazil,” he adds.

In addition to supporting all of its machines regardless of their age, Western States Machine constantly works to develop new technology. “Our research and development team is constantly looking at new ways to upgrade our machines,” Sinnard says. “When new technology emerges, we try to be on the front end of that and get new machines to the market as soon as possible. Our customers dictate where we are heading.”

One of the company’s recent product innovations is the Universal Discharger, which can replace the dischargers used on many of Western States Machine’s older centrifuges. Introduced two years ago, the Universal Discharger’s external cam design allows for quick and easy adjustment, as users loosen and rotate cams in four locations. “With the new Universal Discharger, adjustment time is decreased from four hours to 15 minutes,” the company says. “Assuming a machine produces one ton of sugar per cycle with 20 cycles an hour, customers gain 3.75 hours or 75 tons of additional sugar processed.”

The company’s ability to develop new products, as well as its continued focus on the principles on which it was established 100 years ago, is expected to guide it through the next phase of its history.

“Through the constant innovation and foundational principles established in 1917 – distinguished service, unprecedented quality, and cultivated relationships – Western States is poised for continued and future growth,” the company says.