Back to Profile Gallery > Westmark Products 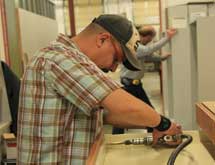 In February 1985, a young Dennis Milsten opened Westmark Products, which specializes in custom cabinetry and casework for commercial applications. Milsten, the company’s president, has steered the company to a projected $30 million in sales this year. Milsten began his career in 1975 as a salesperson for a millwork company and knew the industry very well when the opportunity came up to purchase a millwork company of his own. “The owners wanted out, but I decided it might be better to start from scratch,” he says.