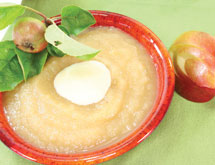 Do consumers want to tear open a pouch of apple sauce or open it with a cap? Although that might seem like a minor concern in the full spectrum of apple sauce production, it is that “last mile” to the consumer that can make this a half-million-dollar question.

For White House Foods, which does business as the National Fruit Product Co., CEO David Gum guessed wrong at first because of his concerns with the cap and additional expense. After all, Tropicana was going with the tear pouch, and he reasoned that the combined research couldn’t be wrong.

“Some of the risk you take in being a branded company is you sometimes launch something, and then the industry or the market goes in a different direction,” Gum laments. But he got off easy with a half-million-dollar line that will package apple products in pouches with caps on them at a rate of 130 units a minutes – many packaging lines cost from $3 million to $14 million, he says.

“It’s a vinegar drink that is flavored naturally by grapes or peaches,” Gum explains. “There’s certainly a lot of tales of the values of vinegar, and vinegar is used as a drink widely in China. They perceive it as a health benefit. So we’re finding that demand is picking up here in the U.S. We believe this vinegar drink will be successful in the environment and culture that we’re in today.”

Another new product is FRUITASTICS, which is all-natural, smooth apple sauce in a pouch with a cap for snacking. They are available in four flavors and have no added sweeteners or artificial ingredients. Designed for lunchbox use, in each box of the pouches are stickers with core values on them that children can apply to the pouches.

Each of these products requires different production methods. National Fruit Product Co. has two plants next to each other at its headquarters in Winchester, Va. The south plant measures nearly 700,000 square feet, and the north plant is approximately 300,000 square feet.

The plants share energy sources but also can be run separately in the event their production schedules vary. They each have a source of water and electricity to provide duplication to enhance customer reliability. “We still run two facilities from a risk standpoint – making sure that we are separate enough so that if anything were to happen, we could still supply our customers – but consolidated enough that we don’t give up any of the cost benefits by being totally consolidated,” Gum explains.

“There are certain parts of our operation that cannot go down, or if it would go down, it would take 15 days to start up,” Gum notes. “Those pieces of our operation have their own power resources and are what we call the ‘bulletproof facilities.’ So they continue to run regardless of resource interruptions.”

National Fruit Product Co. has a total of 16 production lines run by three different teams typically for six days a week on 12-hour shifts, but some lines occasionally run seven days depending on the production required. At any one time, five or six of the lines will be running simultaneously while others are receiving maintenance, are in sanitation mode or are being set up for another production run.

The company inventories up to two weeks of approximately 685 SKUs. “It’s very important for us to be able to run on a just-in-time basis, and also to have extreme reliability with our production facility to accommodate that,” Gum stresses.

Although the company does not divulge its production figures, “Virginia grows about 5.5 million bushels of apples,” Gum notes. “There are not enough apples in Virginia to supply us.” To feed that supply, National Fruit Product Co. is expanding its local apple orchards at a rate of 200 acres annually.

“We decided it was good for us to be more vertically integrated, plus it helps us from a cost and a reliability standpoint,” Gum notes. “We are trying to get to a point where more than 50 percent of our apple supply would come from our own orchards. Typically, our apples are coming from Pennsylvania, Maryland, West Virginia, North Carolina and New York. The furthest we would source would be Washington state.”

National Fruit Product Co. was able to centralize its production over the years as the apple processing industry progressed from a local, seasonal business to a year-round operation. The company stores its apples in an atmospherically controlled environment by removing the oxygen from the storage areas.

“We control the oxygen level down to 2 percent or a little under,” Gum calculates. “That allows us to keep apples on a year-round basis – even keep apples from one year to the next.

“When we bring them out, they are fairly close to what they were like when we put them in. You can keep a consistent blend of apples and a consistent sugar and acid ratio so they get the same flavor year-round. We believe the consumer wants this consistency.”

National Fruit Product Co. recently completed a four-year project to sort and size its apples electronically before processing. “We came up with it and said this really would be a much better way to do this process than what the industry historically has done,” Gum relates. “We went through trial and error, and it took millions of dollars to do this, but it’s working very well, and we’re pretty excited about it.”

That is as much information as Gum will divulge about the system his company’s in-house and outside engineers designed and built. Being a family owned and managed company, National Fruit Co. has reduced staffing requirements through automation, attrition and retirement of employees. “We’ve invested over the last seven years very aggressively into our manufacturing facility,” Gum reveals. “We’ve taken our manufacturing employment and cut it in half by our improvements. I’d say our team has done an outstanding job of improvements and cost of operation.”