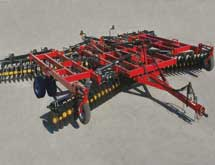 Wil-Rich LLC provides tools for one of history’s most longstanding professions: farming. It’s a basic, yet crucial element to any nation’s vitality. For four decades, Wil-Rich has been a full-line manufacturer of tillage equipment for corn growers and has been known for heavy-duty equipment that’s made to handle large, high-residue farms. In 1981, the original owners sold Wil-Rich to a company in California. It then switched from one out-of-state owner to the next, losing sight of its original purpose as it passed through each hand. That is, until 2001, when a group of North Dakota businessmen bought the company and vowed to turn it around.

Victor Klosterman, part owner of the company, came to Wil-Rich as general manager, a position he still holds today.

Before he stepped in, the company had five separate general managers in a six year span. However, he saw its potential to be the leading manufacturer it once was.

“I saw the opportunity that this company could be very successful,” says Klosterman. “It just needed to go in a little bit different direction than it had been going.”

It was bought by Klosterman, who has a farming background as well as engineering and general management experience; along with Mike Bullinger, who brings financial expertise to the company; and Brian and Howard Dahl, whose families have operated two other manufacturing companies in North Dakota.

Howard is the company’s export manager, and Brian’s background is in manufacturing. Each owner brought in a different skill but according to Bullinger everyone had the same goal. “We went back to the basics,” he says. “What was the success of Wil-Rich? They made really good heavy-duty farm equipment that worked for the farmer and was reasonably priced.”

The company made a number of changes to reduce cost and improve performance. It cut all non-tillage equipment, and the current line of products are either new or have been redesigned to current standards.

The company eliminated an excess of manufacturing facilities sprawled throughout the state and kept a 340,000-square-foot factory in Wahpeton, North Dakota.

While these changes were being made, the owners encouraged input from the people who had given Wil-Rich its past success: the employees and the customers.

“We stood in front of the employees and said ‘you’re the people who run the machines,” says Bullinger.

“We met with the employees and gave them a challenge to step up to the plate on ways to improve what they were doing in the factory.”

All of Wil-Rich’s products are built from farmers’ request, and 75 percent of its engineering staff either have farms or grew up on farms.

A prime example of the company’s collaboration between farmers and engineers is the award-winning 657 combination disc-chisel-ripper, which won the 2006 FinOvation Award from Farm Industry News. With the help of three farmers, the factory was able to produce a chisel plow with added front discs to aid in residue clearance.

“This one-pass tillage tool serves as a disk, chisel and ripper. It turns and mixes residue with topsoil while reducing soil compaction.”

“They said if you did it with these improvements you’d have a winner; and it has been.”

Wil-Rich’s products are representative of the company itself, which has seen steady growth since 2001.

The company has quadrupled its revenue and implemented an em­ployee profit-sharing plan. It has a presence in 25 states from as far east as Ohio, to the West coast in California and Washington, and each year ten to 30 percent of its revenue comes from overseas sales in Russia, the Ukraine, China and Kazakhstan.Wil-Rich also has quicker turnaround times than many of its competitors that require an average six-month notice.

Wil-Rich, on the other hand, only requires two to three months.

From this growing position, Wil-Rich was able to acquire another farming manufacturing company, Wishek Steel and Manufacturing based in Wishek, North Dakota.

Wishek was successful but needed help to grow the company even further. After the 2007 purchase, Wil-Rich improved production by investing in a new assembly plant, more manufacturing space and a new paint system. Wishek exclusively manufactures disc-harrow equipment used in high residue crops and hard ground conditions Klosterman says the company plans to expand the product line into the regions of the world where sugar cane and rice are grown.

Wil-Rich LLC and Wishek Steel and Manufacturing are manufacturing companies that have flourished under the current leadership staff.

The companies have grown together, and their biggest opposition has not come from competitors but rising steel prices.

But despite material costs, Klosterman says business has not slowed down during the recession and Bullinger says the efforts to develop these companies have been more than worth it.

“There’s challenges and risks that come with getting these business turned around,” says Bullinger.

“But the enjoyment is to walk through the plant and be able to visit with people working out there, and they’re happy to have a job.”