As the cable industry in Europe continues to grow in both digital and energy markets, Europacable is representing the leading European manufacturers of these high performance products during the creation of Europe’s Energy Union and Digital Single Market

Operating as the voice of the wire and cable industry in Europe, Europacable provides membership to the world’s largest cable makers and highly specialised SMEs throughout Europe. Globally its members employ over 70,000 people, of which more than 50 per cent are based in Europe; these companies generated a turnover of 20 billion euros in 2014 with their products

that cover the full spectrum of energy and communication cables. Proud to represent the manufacturers of these high performance products at a European level in relevant EU policy debates, Europacable is recognised as a fully transparent lobby organisation and a trusted source of technical information on wire and cable products. Actively engaged with relevant standardisation processes, the organisation also raises the visibility of the European cable and wire industry as it strives to secure Europe’s technology leadership.

Looking at the challenges and opportunities faced by those within the evolving cable industry, Dr. Volker Wendt, Director of Public Affairs at Europacable comments: “From a Brussels perspective we see three core focal areas for growth in the cable industry in Europe. The first is the drive towards what is creating Europe’s Energy Union, which has been manifested in concrete targets that have been set at European and member state level. There is very strong demand for underground and submarine cables for the interconnections and connections of offshore cables for windfarms over the next ten years. Meanwhile, on the digital side of the industry, there have been clear targets set for the creation on what is called the Digital Single Market by 2020; this will be relaid in considerable investments in telecommunication infrastructure, notably fibre, and again we see a great potential for the industry to respond to this.

“Thirdly, we see a call for higher performance of cables; the best manifestation of this is the Construction Production Regulation – or short: CPR – which entered into force on the 10 June 2016 and sets new mandatory fire safety requirements for fixed cable installations. In response to this, we launched what we have called the Europacable Industry Charter, which expresses the commitment of our members to high quality cables; this has been signed and endorsed by all of our members.” Committed to supporting its members within the three dimensions, the Energy Union, the Digital Single Market and the specifications for cables, Europacable provides a strong voice for all companies within its organisation to the Brussel societies.

Set up with the goal of making energy more secure, affordable and sustainable, the European Energy Union will allow a free flow of energy across borders and a secure supply in every EU country. With a policy framework for energy and climate for 2030 in place as well as an energy security strategy, the objectives of the Energy Union is to pool resources, connect networks and unite the EU’s power when negotiating with non EU countries; to diversify energy sources, help EU countries be less dependent on energy imports, reduce Europe’s energy use by 27 per cent by 2030 and emit at least 40 per cent less greenhouse gases by 2030.

With concrete targets in place for every member state to have interconnection capacity of at least ten per cent of the installed electricity capacity in place by 2020 and 15 per cent of the interconnection target complete by 2030, it is clear that Europe requires more electricity grids. In response to this demand and the fact that it takes on average 15 years to realise new high 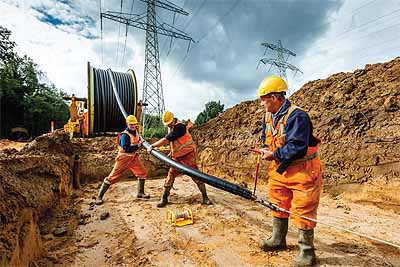 voltage transmission projects, of which more than 30 per cent suffer delays caused by the Not in My Back Yard (NIMBY) phenomena, underground cabling has become a readily available solution for transmission system operators.

For high voltage alternative current (HVAC) projects, partial undergrounding of up to 20 km is being deployed in projects based in the Netherlands, Belgium and Germany. When it comes to using HVAC, partially underground sections complement overhead lines in sensitive areas, which thus eradicates issues with public concerns and leads to faster product completion. For high voltage direct current (HVDC) cables, which are used to carry high electricity loads over long distances, these underground cables serve to cover long distances where local consent may be challenging to achieve.

As Europe’s future grids need to be reliable, affordable and acceptable to the public, it would appear that underground and submarine cabling is the way forward to achieve these requirements, with wholly capable and experienced Europacable members ready to assist in the building of Europe’s goal for an European Energy Union. “Technology within the European cable industry continues to evolve and reach better performances; if you look at energy cables, ever higher voltages can be carried ever longer distances and in submarine cables they can reach ever greater depths. Our members continue to push technology innovation forward and cables are certain to become the backbone of Europe’s future energy and digital infrastructures and will be essential for the ensured competitiveness of Europe over the coming years,” highlights Volker.

Alongside these major developments in the energy sector, the European Commission has just issued its ‘Connectivity Package’ paving the way for more and better internet connectivity for all EU citizens and businesses. The Commission highlights that ‘first-class communication networks’ will be crucial to reach the ambitious target of a truly Digital Single Market by 2025. This now comprises concrete objectives like giving main socio-economic drivers access to extremely high gigabit-connectivity, equip all EU households with at least 100 Mbps download speed and ensure all urban areas and major roads have uninterrupted 5G coverage. Concrete proposals like the ‘5G Action Plan’ and the new initiative ‘WiFi4EU’ which is to develop free Wi-Fi access points in communities and cities across Europe, will push for the deployment of notably fibre optical cables.

From a Europacable perspective it remains crucial to ensure that Europe’s future telecommunication and data infrastructures will be built using only high quality cable technology. “Notably when public co-funding is involved, we believe it is of fundamental importance to ensure that Europe’s networks are future proof,” Volker underlines.

With a great deal of opportunities ahead for those within the cable industry in Europe, Europacable will remain busy over the coming years as it delivers technical expertise during projects while also continuing its involvement in stakeholder communications in various EU member states. “Both the creation of the Energy Union and Digital Single Market offer strong opportunities for the European cable industry. Because of this, the cable industry and our products are to play a central role in shaping Europe’s future energy and digital infrastructures,” concludes Volker.