Back to Profile Gallery > Leader Tech Inc., a Heico company 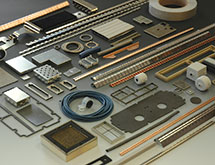 No matter whether Leader Tech Inc. is providing products for satellites or computer modems, the company makes sure to provide a consistent level of quality, Director of Manufacturing Technologies and Quality Systems Gary Mandile says. “It has to be the same level at all times, regardless of the customer or application,” he asserts.

Leader Tech serves the medical, defense, automotive and consumer electronics markets, Mandile adds. “There’s not very many markets that we’re not a part of,” he says. “We’re the only U.S. manufacturer of EMI shielding that deals with all facets of the shielding industry.”

Leader Tech also is a subsidiary of HEICO Corp., an aerospace, industrial, defense and electronics company based in Hollywood, Fla. Despite HEICO’s vast size, “We don’t have the bureaucracy that [usually comes with that],” Mandile asserts.

“They foster a corporate culture that allows us to succeed on our own,” he says, adding that Leader Tech also has a bureaucracy-free structure. “Everyone on our team is trusted [that] we’re making the right decisions. It makes us poised to react quickly.”

Mandile joined Leader Tech nearly four years ago, after working in the automotive industry. “I spent about 10 years in Detroit, working for the big three,” he recalls, noting that he also worked at starting up a new Hyundai plant in Alabama.

When he arrived in Florida, Leader Tech was “looking for someone with a more engineer-minded, quality background,” he says. “That’s where I fit in.”

What makes the company successful, he notes, is its willingness to work with the customer. “Instead of just building straight from a print, they consult with us, and we recommend best practices from an engineering standpoint,” he explains.

Leader Tech also has the ability to perform a quick turnaround when building prototypes, Mandile says. “We’re known for taking on difficult designs that other companies simply decline to quote,” he says. ”That allows us to try new things and create product innovations that have a real impact in the market.”

Leader Tech constantly looks at ways to operate more efficiently, Mandile says. One area the company is exploring is manufacturing its packaging on its own, instead of buying it from suppliers.

“Who’s to say with the talent we have and the skilled people we have [we] can’t create our own packaging?” he asks, noting that its tool room and manufacturing engineers are developing its own custom packaging. “We’re thinking outside the box a little bit.”

Leader Tech also utilizes Six Sigma and lean practices, Mandile says. Recently, when the company looked at setup times in its forming operations, “We found that the actual setups were taking too long and were highly specialized,” he recalls.

Before the forming process, setup operators took 15 minutes to determine the right forming blades and bases that were needed and size the setup by hand. But by implementing a modular system that allows Leader Tech to simply dial in the size and utilize pre-determined blades and bases, the company shortened the process substantially.

“We cut our setup times from 15 minutes to five minutes,” he says, noting that Leader Tech does 50 setups daily. “That’s eight hours of work time we’re saving each day.”

This also allowed Leader Tech to virtually make the setup operator’s position obsolete. However, the company did not lay any employees off, Mandile asserts. “We will absorb them into other areas of the operations,” he says.

Mandile is proud of Leader Tech’s team. “Every department here has contributed to [our] success,” he says. “I’m constantly amazed at the creativity and the ingenuity of our employees here.

“I still believe the United States has the best and brightest workforce in the world,” Mandile asserts. “That’s what we have here in Tampa – a team that exemplifies those things.”

All of its employees, he notes, care about their work. “It doesn’t matter if you have the best tool in the world or the best product,” he says. “If you don’t have the right people building it, you’re not going to get anywhere.”

Its staff will help Leader Tech as it continues to expand internally and meet its clients’ expectations for faster turnarounds, Mandile says.

Not only can the company manufacture prototypes quickly, “We’ve invested in new equipment that allows us to do some of these designs in minutes rather than weeks,” he says.