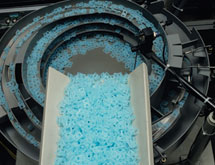 Universal Dynamics Inc. (Una-Dyn) operates on a larger scale than many of its competitors, according to President Bill Goldfarb. As a leading supplier of auxiliary products for the plastics processing industry, Goldfarb says Una-Dyn has accumulated a wealth of expertise and experience over its more than 50 years in business, and it has become known throughout the plastics industry as a company that can get things done for customers in a big way. “One thing we’re known for is high-throughput, large-scale equipment,” Goldfarb says. “We can cover our customers’ requirements from small-scale injection molders to the highest throughput extruders on the market.”

Una-Dyn has been in the business of serving the plastics industry since 1957, when it was established to manufacture dehumidifying equipment for the U.S. government and its contractors. This equipment was used initially to preserve missile sites, warehouses and ships in storage, but soon the company was providing that same equipment to private customers in the plastics arena through a joint venture with the Rainville Company and DuPont. By 1965, Una-Dyn was successful enough to be purchased by The Rainville Company, and in 1982 the company adopted the Universal Dynamics name for its operations. In 2008, the company was purchased by Piovan S.p.A., a leader in North America in the production of PET bottle auxiliary equipment and systems.

Today, Una-Dyn has a broad product line that includes equipment designed for material handling, drying, conveying, feeding, blending, size reduction and heat exchangers. These are manufactured under the brand names Una-Dyn, AutoLoad, AutoGrind, AutoDry and H2O Engineered Water Systems. Not only does the company design and manufacture these systems, it also installs them for its customers, Goldfarb says, and the company’s engineering expertise has made it a highly sought-after partner for many in the plastics industry.

Goldfarb says the company’s primary customer base today consists of PET sheet forming companies, many of which have been consolidated out of smaller operations over the years. As such, many of these customers have consolidated their old equipment into new facilities, and they require assistance with retrofitting and repurposing that equipment to meet the needs of today’s marketplace. This is an area in which Goldfarb says Una-Dyn also excels.

With the company’s current capabilities and its plans for expansion in the future, Goldfarb says Una-Dyn has what it takes to continue delivering a high return on investment for its customers in the plastics industry.

Goldfarb says one of the biggest advantages Una-Dyn brings to the marketplace is its manufacturing flexibility, even as it builds very large-scale pieces of equipment. Many of the company’s competitors specialize in building low-dollar-value standardized equipment, but Una-Dyn’s engineering expertise and state-of-the-art manufacturing capabilities allow it to produce customized equipment to a customer’s exact specifications and within a prescribed production schedule. Goldfarb adds that Una-Dyn’s capabilities also allow it to produce smaller, standardized equipment at the same time as the larger, customized pieces.

In particular, Goldfarb says, the company’s laser cutting capabilities are among the best in the industry. Una-Dyn recently replaced three laser cutters that were more than 20 years old with one new unit that outperforms the older units in speed and energy consumption. “One of our biggest manufacturing attributes is our laser cutting ability,” Goldfarb says. “We run all of our sheet metal production through our new laser cutter.”

The flexibility and scalability of Una-Dyn’s manufacturing processes have been strong advantages for the company, especially in recent years. Goldfarb says the current sluggish state of the economy has put constraints on demand with few new plants being built. “One of our biggest problems is that we do sell a lot of large-scale equipment, and they’re many times dependent on a new plant process,” he says.

With few new plants being built or existing plants being expanded, Una-Dyn has to be able to survive without the large orders that make up a substantial part of its business. Goldfarb says the company’s ability to switch seamlessly between large custom equipment and smaller standardized equipment has been a significant help during these times.

Una-Dyn continues to make improvements to its manufacturing operations as it looks ahead to the future. Goldfarb says the company is developing an expansion of its main manufacturing facility in Woodbridge, Va., that will relocate equipment and processes from two other buildings and streamline production.

The company has fully embraced lean and kaizen principles, according to Goldfarb, and it continues to look for ways to better utilize the space it has and reduce waste. In July, the company was recognized as a Kaizen 5S Sustained company, and Goldfarb says the honor is emblematic of the commitment shared at Una-Dyn to becoming a leaner operation. With that level of commitment, he says, Una-Dyn stands to remain a fixture in the industry for another half-century and beyond.