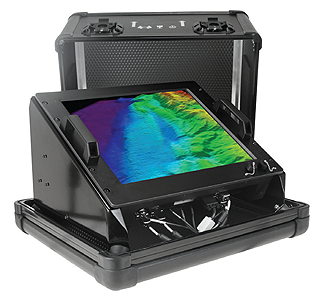 An internationally recognised tried, tested and trusted supplier of specialist computing platforms, Captec operates in a unique space within the marketplace where systems and solutions are required to go beyond the limits of commercial computing

Captec – standing for Computer Applications Technologies – has been in business since 1985, when it first began trading under the name Integrated Measurement Systems Ltd. Arriving at the dawn of the personal computer age, the business was the brainchild of founder and CEO Max Toti, an electronics engineer from Southampton University with previous careers experience with the likes of IBM and Hewlett Packard. Over the next third of a century, the business continued to expand and evolve to become a multi-award-winning designer and manufacturer of specialist computing platforms that can be designed to any form factor, whether it be rugged tablets and industrial computers, or complex computer racks and Internet of Things (IoT) computing. This has led to Captec becoming the proud recipient of two Queen’s Awards in just three years, the first being the Enterprise Export accolade in 2016, and the second coming in the prestigious Innovation category this year.

“When you think about computing,” Max begins, “it basically splits itself into two broad categories. One is consumer/commercial computing, where you have mass produced products designed for use in non-hostile environments such as the home or workplace, and the other is computing designed for critical applications where reliable products are needed in often challenging operational environments. It is in the latter field where Captec specialises, and where we have become experts in providing platforms for a wide variety of applications, from transport network infrastructure and defence systems, to highly certified markets such as the medical equipment industry.”

As Max goes on to detail, while there are lots of people out there today that can make Captecconsumer-led computers, a great deal fewer have the unique know-how, experience and IP expertise to engineer platforms that meet exact requirements irrespective of complexity or environmental demands. “In the course of our history, we have developed the means to deploy computers onto war ships, submarines, oil rigs and within oncology machines, so you can see that we possess quite a broad depth of knowledge and engineering capabilities,” he states. “Through our commitment to research and development, and innovation, we are constantly pushing the envelope as we make our platforms faster, cool them more effectively, protect them from greater shock or vibration levels, or certify them to very high industry standards, to name just a few topics. I think it is definitely fair to say that we are more willing to experiment and try new things than most other companies would be, and this has paid off in the form of a number of successful projects through the years.”

Examples of such projects are numerous, but by taking a handful of both past and recent case studies, one can see the breadth of applications that Captec’s solutions are today vital components within. For starters, very few commuters on the London Undergroundnetwork will be aware of the critical role the company’s technology plays in its day-to-day running. “We have done many projects over the years for London Underground and today a large proportion of its infrastructure runs on our computers,” Max reveals. “This includes all of the key station management systems – from public information display systems and signalling to barriers, ticketing machines and digital signeage – as well as the platform which supports the Oyster Card.”

Meanwhile, within the medical sector, Captec provides highly certified computers to, the world’s second largest manufacturer of oncology equipment. These computers manage and control the delivery of non-evasive cancer treatment using radiation, and as one would expect such highly precise clinical equipment requires the most reliable, certified and trustworthy systems, which is what Captec prides itself on delivering.

More recently, the company has bolstered its track record of winning important contracts with the signing of an agreement to design a completely new, advanced computer rack architecture for use by the Royal Navy. “This particular contract win comes at a crucial time when the Navy is undergoing a refresh of its satellite communications systems,” Max adds. “The prime on this contract – Airbus – required a partner to design an advanced architecture in order to deploy systems in all of the Navy’s surface vessels, and we have since created a very modular rack, complete with all the equipment payload that accompanies it and the ability to accommodate existing communications hardware. The result has been a sizable, prestigious and successful project for all parties involved.”

Much of Captec’s growth has been a result of organic investment and development, however it also owes its success to its ability to identify good acquisition opportunities. A good example of this was its acquisition of Cove Industrial Enterprises in February 2019. With a number of complementary capabilities and a common customer base, especially in the aerospace and defence arenas, Cove was already one of Captec’s key suppliers of sheet metal work. When its founder and owner Gordon Day approached retirement, the time proved right for Captec to make an acquisition offer, and the result has been the ability to provide customers with an end-to-end service and create a value stack with a single point of accountability, one that reduces the complexities of having a mixed supply chain.

Captec has since followed up the above with the acquisition of Aleutia, a business heavily involved with embedded, edge and IoT computing. “The marriage of Aleutia’s innovative legacy products with our own technical capabilities, experience and international reach will enable us to refresh, revive and reposition our computers around several exciting new applications including artificial intelligence, machine vision, security and machine learning,” Max enthuses. “In the longer term, we have further acquisitions in the pipeline where the focus is on the IoT, which is where I see a lot of potential for growth for the foreseeable future.”

More pertinent for Max and the rest of the Captec team, however, is the news that the company has recently signed up to the London Stock Exchange’s (LSE) support and capital raising ecosystem, ELITE, which is primarily designed to prepare companies for a stock market floatation. “My plan is that, by Q4 of 2020, Captec will be floating on the LSE’s AIM market,” Max adds. “In doing so, we will look to access larger pools of capital, which in turn will open doors to bigger acquisitions on an international scale, particularly in the United States.”

Needless to say, then, that Captec finds itself in the midst of an exciting period of time, but also one in which Max wants to remain with his feet on the ground. “By nature, I like to think of myself as an ambitious person and that has helped in transforming what was at first a one-man-band into a company with over 200 employees across the growing group as well as a large global supply chain. While the months to come will be predominantly about growth and scaling the business, I never want to lose sight of the real heroes of our story, namely our fantastic customers and our incredibly talented people,” he concludes.