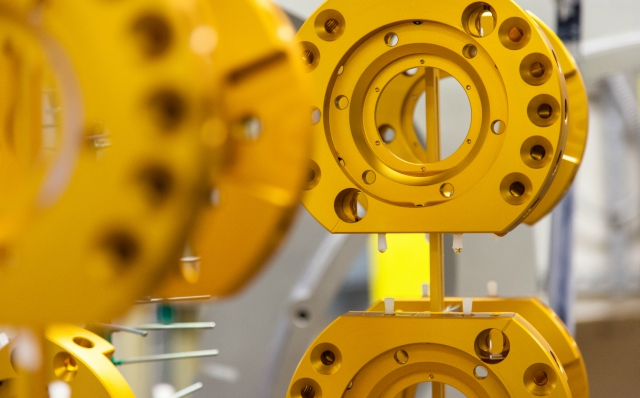 Success is often about being in the right place at the right time. For Tamea Franco, one night in the early 1990s changed the entire trajectory of her career.

Operation Desert Storm had just begun when representatives from defense contractor ITT Corp. showed up at Franco’s anodized aluminum shop, East West DyeCom. They wanted to know whether Franco could anodize a casting for a shipment of night vision goggles, a process that would insulate the surface of the goggles and protect them from electrical interference. The ITT reps showed up around 5 p.m. and needed the casting back by 10 p.m. to make their next shipment to troops in the Middle East.

At first, Franco balked at the opportunity. She had spent the last several years building East West DyeCom into a producer of colored anodized aluminum for metal artists, an industry she fell in love with during a stint working in her uncle’s watchmaking and jewelry shop after high school. Having lost interest in community college, Franco followed that passion and enrolled in Joseph Bulova School of Watchmaking. But when the advent of the quartz wristwatch in the 1980s took much of the mechanical craftsmanship out of the trade she switched to jewelry repairs and settings. She was self-employed and that gave her an opportunity to try and test new things.

Franco took cold connection classes, where she learned about anodizing aluminum and met metal finishing suppliers. Ready to make some money, she started East West DyeCom with $1,300 and began anodizing and dying almost any kind of aluminum product she could find.

Still, military hardware was a whole different field that required far more precision than Franco was used to. She told them she didn’t have the equipment to measure the thickness of the coating, but ITT was in a jam and East West DyeCom was the only anodized aluminum shop near its night vision and imaging office in Roanoke, Va. She decided to try. East West DyeCom had the right acid solution and current density, but determining the thickness was all guesswork. She was lucky that night: ITT accepted the casting and it was on a plane to Israel just a few hours later.

The experience was Franco’s first brush with the commercial side of the industry but it sparked her interest. Soon after, she started researching mill specifications, attended classes on specialty chemistry for anodizing and hired people for a new division focused on commercial customers. 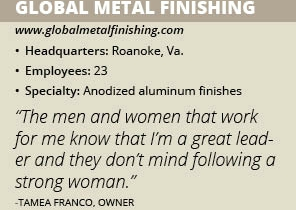 Establishing Market
For 15 years, Franco ran the colored aluminum jewelry suppliers and commercial businesses side by side under the DyeCom name. That ended six years ago, when she purchased a new facility and separated the commercial side into a new company called Global Metal Finishing to better manage the communication styles and stricter specifications of those customers. “I was going crazy because engineers require different things than artists,” Franco says.

In the six years since it split off into its own company, Global Metal Finishing has continued to grow its capabilities alongside its customer base. In 2016, the company achieved AS9100 certification, a quality management requirement for aviation, space and defense organizations akin to ISO 9001. The certification opened up Global Metal Finishing to a much wider range of customers around the world, not only in aerospace but also defense, medical, robotics and automotive. “[Components] might be coming off our line one day, the next day they are shipping to Europe or Japan,” Franco says.

That growth has occurred despite the initial resistance Franco faced as a woman in a male-dominated industry. “In the beginning, I thought it hurt me,” Franco says of being a woman-owned business. “But now that I’m growing and have made a good name for the company it doesn’t. The men and women that work for me know that I’m a great leader and they don’t mind following a strong woman. If I say it’s going to get done, they’re going to make it happen.”

The challenge of working in a male-dominated industry has not completely gone away, but it has become easier as Global Metal Finishing has proven itself in the industry. “Any business owner still has those challenges,” Franco says. “But if you have vision, and you have drive and you don’t mind making a sacrifice there’s really nothing that’s stopping you.”

Chasing Nadcap
Franco’s drive continues to push Global Metal Finishing forward. Having received AS9100 certification, the company has now set its sights on the next level: the National Aerospace and Defense Contractors Accreditation Program (Nadcap), an industry-managed accreditation for the aerospace and defense industries.

Achieving Nadcap accreditation will require Global Metal Finishing to expand its workforce and invest in software to better manage its processes. For Franco, it’s a milestone that will mark her personal success after 30 years as a metal finisher. “I still have a long way to go,” she says. “Once we get Nadcap certified and we are looked at as a major player on the East Coast, that’s when I will feel like I’ve made an impact on this industry.”