Many of the best craft manufacturers have one thing in common: they invest heavily in their skilled workers and keep them around for the long haul. It’s no different at window and door frame manufacturer Loewen, where continuous improvement and strong professional development are intrinsic to the culture.

The Canadian company works with employees early on to understand their interests and identify opportunities within its organization so that they are more likely to stick with Loewen as they advance in their careers. Those efforts have helped the company counteract the generational attitude shift that has millennial workers changing jobs more frequently than their predecessors.

Vice President of Operations Todd LeRoy, who has been with the company for 35 years, counts himself as an symbol of Loewen’s success in developing employees. He joined the company after graduating high school and his first job was loading trucks. In the nearly four decades since, he’s worked and led every department aside from engineering and finance. “I’m an example of the many who worked their way up through the organization,” he states.

Loewen’s roots date back to 1905 when founder Cornelius Loewen started a sawmill in the boreal forest in southeast Manitoba. At first, the mill produced items such as church pews and beekeeping equipment before eventually specializing in windows and doors, which remain its focus today.

As the Canadian company branched into the United States it moved further into luxury windows and doors to better cater to its new market, which now makes up nearly 80 percent of its business. In the past decade, Loewen continued to evolve its products into the ultra-luxury space, serving the wealthy top 1 percent. “Loewen is recognized for quality,” LeRoy says. “Our products aren’t the cheapest. We don’t apologize for that – our products are very robustly built.”

The majority of Loewen’s wood is Douglas fir, a strong wood that is resistant to rot and bugs, making it suitable for any environment. About 60 percent of its wood supplies come from the Canadian province of British Columbia with the remainder from the U.S. states of Oregon and Washington. In addition to the Douglas fir, the company offers some products made from Honduran mahogany sourced from plantations in the South Pacific island country of Fiji. 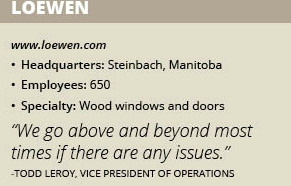 Wood products have been Loewen’s specialty for more than 100 years, but some high-end customers prefer the look of steel. To fill that gap in its lineup, Loewen purchased La Loma, a manufacturer of steel windows based in Tucson, Ariz., in 2016. The acquisition of La Loma, now called Loewen Tucson also opened the company up to more wood types. LeRoy says Loewen can produce frames at the Tucson facility using nearly any kind of species a customer requests. “It’s all made-to-order,” LeRoy says. “We’re more a custom shop than a regular window shop these days.”

The shift toward custom stems from the unique nature and requirements of luxury homes. Many homeowners want a more contemporary look with larger openings that bring in more natural light and reveal beautiful, wide views of the surrounding environment. A standard window frame is not large enough to offer that open feel, so Loewen has had to develop custom products that can support a variety of window sizes and configurations.

Its latest product introduction is a curtain wall that uses the framing and windows as a part of the support structure to allow for the entire wall to act as a large window. Curtain walls have traditionally been used primarily in commercial construction, but  are becoming more common in residential structures. “It fits into the contemporary [trend],” LeRoy says. “Most customers build homes on mountainsides or oceansides with very beautiful views. They want to open their home to those views.”

Loewen funnels its custom frames and doors to homeowners through a network of dealers, each of which is granted an exclusive territory. When developing a home project, architects and builders work directly with the dealer to determine the specifications and requirements of the windows and doors. Those specifications are then passed to Loewen, which produces the frame and ships it to the dealer or directly to the job site.

Transporting those large wood frames to construction sites is a challenge, so Loewen contracts delivery to third-party logistics (3PL) providers with a proven track record of service and quality. “Because of the type of product we have, it’s heavy,” LeRoy explains. “It’s not easily handled with mechanical aids – there’s a lot of manual handling. It’s very large. Not every logistics company wants to handle those products so we’re very selective.”

Working with trusted 3PLs is one way the company ensures that homeowners will receive the high-performing products they expect. Loewen has earned a reputation for standing behind its products and doing whatever is necessary to satisfy its customers. “We often go above and beyond if there are any issues,” LeRoy says.

That commitment to quality and strong customer service derives from its heritage as a family-owned business. A private group of investors that purchased the company in 2015 included two members of the Loewen family. “We work really well together striving for a common goal,” LeRoy adds. “I think that with the challenges that have been going on in our industry, we’ve still maintained our strong values of integrity and respect.”