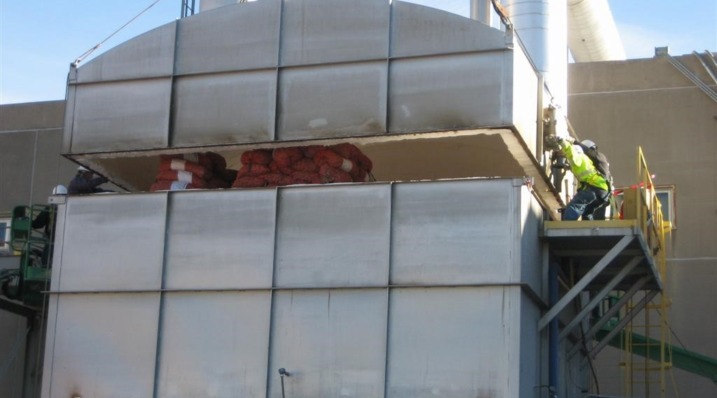 For PolSys Services, providing strong value to customers is a high priority. “We always want to make sure when we work for a customer that they see value,” CEO Rick Corcoran declares.

“As long as we’re taking good care of our customers and [they see] value in our services, they’ll come back, and they always do,” he says, adding that 95 percent of the company’s work today consists of repeat business.

Based just north of Houston in The Woodlands, Texas, PolSys is a leading provider of onsite technical services for air pollution control equipment – including regenerative thermal oxidizers (RTOs), all other types of oxidizers and scrubbers – and industrial burners of all types and sizes. Before starting the company, Corcoran spent nine years in the U.S. Air Force.

“I worked on laser equipment used on the fighter planes for smart bombs and missiles,” he recalls. After leaving the Air Force, Corcoran earned his bachelor’s degree in physics at the University of Maryland.

When he entered the air pollution equipment industry more than 20 years ago, he worked for various companies including Advantage Energy Group. “Their equipment would recover energy rather than allowing it to be wasted by exiting, unused, out of the stack,” he says.

The company, which received financing for its projects from Enron Corp., ultimately closed its doors. Corcoran performed consulting work before co-founding Pollution Systems, a firm that engineers and manufactures high-quality air pollution control equipment, along with partner Kevin Stevens in 2006. In 2017, they spun off the services division of Pollution Systems and founded PolSys Services (“Pol” for “Pollution” and “Sys” for “Systems”) to focus strategically on “the service side,” he says.

Today, PolSys services, repairs and upgrades all makes and models of air pollution control equipment and industrial burners. “We also have a rental fleet of thermal oxidizers that we lease to customers,” he adds. Designed for cost-effective operation, these rentals have proven quite popular according to Corcoran, and PolSys is growing its fleet.

The company serves a broad customer base nationwide that ranges from heavy mining to automotive and semi-conductor manufacturers. In addition to Ford Motor Co., Toyota and General Motors, “We work with Exxon Mobil, 3M and a lot of the chemical companies,” he says.

Reliability, Safety and Compliance
PolSys tailors its services to meet each customer’s needs and expectations. Over time, “We’ve learned there are three targeted concerns for customers that always create a great sense of urgency,” Corcoran says.

Probably the biggest concern for many PolSys Services customers is safety – especially where industrial burners and gas trains are concerned. “We are very familiar with all types of burners and gas trains and are often called in to perform NFPA-compliant burner system safety inspections,” he says. “Safety is always our highest priority and is an integral part of every service we perform.” 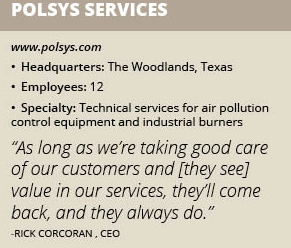 PolSys also addresses its customers’ concerns about equipment reliability, which is especially important for manufacturers. “If their air pollution control system goes down, they’re out of compliance and can’t continue to operate their product lines,” Corcoran explains. “Of course, this can lead to major loss of revenue.”

Corcoran adds that a key way PolSys helps improve system reliability and reduce the probability of unanticipated shutdowns is via service agreements tailored to each customer’s needs for routine/scheduled inspections, basic repairs, and predictive/preventative maintenance.

Compliance with emissions regulations is an important focus as well, since PolSys’ customers want to avoid fines and/or conflicts with their regulatory agencies. Addressing these concerns in the service agreements which PolSys offers has helped form high-value relationships with many customers, he notes.

“It establishes trust,” he says. “[We] help them achieve their goals, keep their system in compliance and make sure it runs reliably to keep their process up and running.”

Ensuring Quality
PolSys also earns its customers’ trust with its R.I.S.C.TM (Reliability Improvement, Safety and Compliance) Software, a proprietary system designed to help improve the reliability of air pollution control equipment. According to Corcoran, not only does the R.I.S.C. platform provide for consistent, highly detailed inspections, it provides a centralized solution for managing inspections, quotations and service history documents, and for the tracking of important measures that affect system cost-effectiveness.

R.I.S.C., he notes, is loaded onto the tablet of every PolSys field engineer and technician, and outlines the steps involved in visits to a customer’s site. “[It covers] how our field team handles each aspect of the service as well as the steps involved to make sure we provide a safe, thorough, and detailed service for our customers every time,” he says.

The company also provides extensive training to its field engineers and technicians, who maintain equipment produced by all manufacturers of air pollution control equipment and industrial burners. “We ensure that when our people arrive onsite, they understand the equipment and they know what needs to be done,” he says.

PolSys provides field engineers and technicians with extensive safety training as well through the Houston Area Safety Council, which it also sponsors. “We work in partnership with them, and all of our people receive significant safety training before they ever set foot on a site,” he says.

Small But Strong
Corcoran credits PolSys’ success to its team. Although it employs just 12 people, “We perform a lot of work for a smaller-sized company,” he says, noting that he has been careful when recruiting. “The people I hire have to be strong decision-makers and problem-solvers, and they have to hit the ground running.”

Fortunately, PolSys’ team has been up to the task. “Our customers have responded very well to all the people we have in the field,” he says. “We’ve made some really good decisions on the people we’ve brought in.”

Corcoran sees a strong future for the company. “Right now, the economy seems to be doing very well,” he says. “Our goal is to help our customers stay up and running so they can keep pace and capitalize on opportunities.”

PolSys Services also is aiming for more expansion. “Before the year’s end, we’re going to be opening a new service office in the Midwest,” he predicts. “Over a five-year period, we intend open two other locations as well, [with] one on the East Coast and one on the West Coast.”

Prioritizing innovation and always keeping quality and customer service at the heart of its operations, MoistTech...

Financially independent and privately-owned, UK-based MHR Global has an established track record of innovation in HR...