One of Canada’s five largest electronic manufacturing services (EMS) providers is expanding its footprint both inside and beyond its home country.

Varitron recently updated equipment in its 28,000-square-foot manufacturing facility in Granby, Quebec, Canada, where it operates high-volume production lines. “We wanted to increase the capacity of that plant to be more competitive in the high-volume market,” Vice President of Operations Francis Mercier says.

Both facilities specialize in high-mix, low/medium-volume manufacturing. Typically, each facility will produce between 350 to 450 different products with an average quantity of 50 pieces each. Varitron offers manufacturing services on a build-to-order, as well as a build-to-forecast basis.

The company acquired the Hudson facility in 2014 to reach out to American customers. “We are convinced that a large portion of our future growth will be in the U.S. marketplace,” Mercier says.

All three of Varitron’s facilities are ISO 9001 certified. The Granby site is finalizing ISO 14001 certification. The Hudson facility is on track to achieving ISO 13485 certification for medical device manufacturing by the end of the year. Lastly, Varitron is also planning to obtain AS9100 certification for work in the aerospace industry in 2018.

Roughly 95 percent of the PCBAs produced by the company are manufactured using the surface-mount technology method, which involves mounting components directly to the board. The method has largely supplanted through-hole technology, which involves placing components via wire leads into holes on the circuit board and soldering the leads into place. 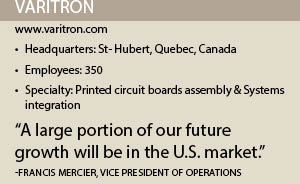 Other services include part-over-part assembly of complex components such as those found in machine controllers and CPUs. The company also offers specialized manufacturing services such as overmolding, which involves injecting a resin or other plastic coating over the PCBA circuitry to create a protective encapsulation and nanocoating, where the circuit is coated with a protective nano-fluid. Both techniques allow PCBAs to operate in harsh environments, Mercier says.

The company also offers circuitry printing services, and plans to soon offer advanced cooling technology. “Instead of being just a manufacturing shop, we are providing high-end engineering and technology solutions from the design phase forward,” Mercier says.

In addition to manufacturing PCBAs, Varitron offers box build, testing and configuration services. These include integrating PCBAs into an enclosure as well as producing full units with cables, switches, fuses, display and packaging, the company notes.

The company’s use of high-tech testing equipment, as well as its dedication to lean manufacturing and Manufacturing 4.0 principles, allow it to efficiently make high-quality products. This is also supported by a thorough traceability system that allows Varitron to capture information about every single component mounted to a circuit board. This same system allows Varitron to use gate controls for every process, and to scan tooling and consumables to ensure every set-up is correctly conducted.

“The processes we’ve developed here have allowed us to be flexible and agile in our introduction of new products, and enabled us to deliver those to our customers rapidly,” Mercier says, noting the company has introduced 2.5 new products daily for the past 12 months. “The majority of our customers tell us our products are the highest quality they have had.”

The company is teaming with local universities and the Quebec government to further develop the skills of its manufacturing staff. This includes internal training programs focusing on robotics used in surface mount technology as well as quality and other topics.

The company’s internal culture has also helped it retain employees and remain successful. “We are very proud that we have maintained a family-based culture while seeing impressive growth,” Mercier says. “Everybody knows each other here, and is very proud to be a part of Varitron – everyone feels they are a part of something important.”