Back to Exclusive Features > Issue 203 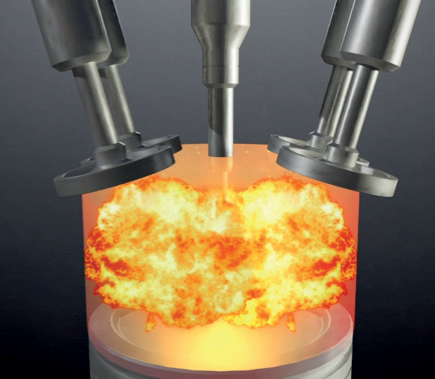 Fuel quality becomes more important as more emphasis is given to improved energy efficiency and better air quality. Performance fuel additives continue to play a key role in fuel quality enhancement, supporting the global increase in demand driven by the rapid adoption of additives to improve fuel efficiencies and reduced emissions, as well as the technical marketing needs of the oil industry.

Consistent with its commitment to innovation, Dorf Ketal Chemicals continues to develop and improve its line of multi-functional performance fuel additives that are marketed under the milEx® and mph® brand names. These additives are formulated with cutting-edge components (generally referred to as Deposit Control Additives or DCA), that are designed to both cleanup and keep-clean engines and hence protect the entire fuel system against lost performance due to deposit formation.

In addition to detergent additives, which have become a standard component of gasoline and diesel fuels, Dorf Ketal also developed a family of novel unique combustion improvers, which deliver benefits when used in both gasoline and diesel engines. This combustion improver, in combination with deposit-control additives, delivers instantaneous and tangible performance benefits such as unsurpassed fuel savings and reductions in particulate emissions (PM2.5 and PM10) that are documented in independent fleet trials in various parts of the world.

Fuel economy and better air quality
Fuel economy is becoming one of the most critical measures of fuel performance. This is being driven by greater demand for more tangible benefits from both motorists and other end-users, as well as increasing concerns relating to emissions reduction and their direct impact on climate change. Many countries are already legislating to achieve ‘Net Zero Carbon Emissions’ by 2050. While improvements have been seen in several parts of the world, global emissions continue to increase. Despite global aspirations to ‘leapfrog’ to alternative sources of energy that are more carbon-neutral, there are significant costs associated with this transition and timelines will vary enormously from nation to nation.

For more than 70 years, the fuel additive industry has focused and relied on DCA to control and improve engine performance. The ability of DCA to remove and control engine deposits has also shown benefits in terms of improved fuel economy, reduced emissions, and better drivability. However, whilst DCA is known to deliver fuel economy, such a benefit is not instantaneous, and is achieved primarily as a result of cleaning up vital engine parts. Furthermore, such fuel economy benefits may not be significant – especially if the engine is new or relatively clean and so, does not have much deposit build-up. To deliver additional and significant benefits, new components are being considered in multi-functional fuel additive package formulations.

Climate change is becoming one of the biggest challenges the world faces today and as a result, legislation relating to vehicle and fuel economy are driving OEM advancements on engine technology. As more sophisticated engine designs are introduced, the fuel appetite for the new hardware drives the need for improved fuel quality. Oil refiners are producing fuels with more of the lighter components in the final fuel blends to meet the more stringent fuel quality requirements. However, these new fuels are more expensive to produce and so fuel economy is becoming even more important to consumers. This is exacerbated further as crude prices continue to rise along with record-high inflation rates.

Apart from controlling deposits/engine cleanliness and friction modification, there have been few, if any, breakthrough technologies developed that have been looked at in these areas of fuel performance. To date, the industry continues to rely on such technologies. However, over the past four years, Dorf Ketal has focused its R&D efforts on combustion efficiency. The novel and unique combustion improver that Dorf Ketal has developed works in synergy with its deposit-control additives to promote the free-radical formation, which is a critical element in the chemistry relating to any fuel oxidation process.

The novel combustion improver technology
The combustion of a hydrocarbon-based fuel, regardless of its quality, is never 100% complete. In a complete combustion reaction, the key elements of any fuel – carbon, hydrogen, and oxygen – are converted to carbon dioxide (CO2) and water (H2O). When incomplete reactions occur, carbon monoxide (CO), soot (unburned hydrocarbons), and other chemical variants are generated. Such emissions are harmful and are significant contributors to air pollution.

Considering a typical methane fuel, the general reactions are shown below:

In an internal combustion engine (ICE), these typical reactions occur simultaneously albeit to various degrees depending on the efficiency of the entire system. In a new ICE, where all components are still clean and new, chemical reaction (1) is predominant, and efficient fuel utilization occurs. When engine components begin to foul (form deposits) or wear, chemical reactions (2) and (3) increase their contribution thereby requiring more fuel to perform the same amount of work. As more fuel is consumed, more combustion gases are also emitted, including CO2 which has now become a key concern because of its very significant greenhouse effect, resulting in increased global warming. Other emissions also contribute to the ‘Greenhouse Effect’ but nowhere near to the same degree as CO2.

The result is the occurrence of a more efficient combustion process that maximizes chemical reaction (1) whilst minimizing chemical reactions (2) and (3), thus releasing more energy, improved efficiencies, and lower fuel consumption. As a direct consequence, by reducing the amount of fuel required to perform a given task, lower emissions of CO2, CO, and unburned hydrocarbons (such as soot) are achieved.

For diesel, a VOLVO FH460 truck (460 HP), equipped with the Dynafleet® system that measures emissions and fuel consumption was used in the test with a B12 (12% bio-component) test fuel. Results are shown in the table below.

For gasoline, tests were conducted in a VW GDI passenger car that ran on E27 gasoline-ethanol blend test fuels.

These are just examples of controlled vehicle tests that were conducted in Brazil. However, more data is available covering comparable trials that have been conducted in other parts of the world.

More basic and fundamental research continues within Dorf Ketal and leading technology institutes around the world to further understand and improve the technology, but the basic mechanism of the DCA/CI combination is a combination of detergency action and free-radical formation that impact the kinetics of combustion reactions.

Conclusions
Whilst DCA will remain an important and integral component of any multi-functional fuel performance additive in the future, a step-change in performance is being delivered by Dorf Ketal’s CI technology.

The technology is unique and uses novel chemistries, which deliver significant benefits when used in both gasoline and diesel fuels/engines. The combination of Dorf Ketal’s DCA and CI chemistries delivers instantaneous and tangible performance benefits such as very significant fuel savings and emission reductions such as CO2 and particulate emissions.

In real-life fleet tests, consistently positive numbers – as high as 10% depending on the type of fuel and engine technology – are being delivered.

These results directly contribute to the reduction of vehicle operating costs and the reduction of regulated emissions that can lead to improved Sustainability and reduced Carbon footprint claims.

Proenergy has invested $28.8 million in an advanced manufacturing initiative, starting with the recent acquisition and...