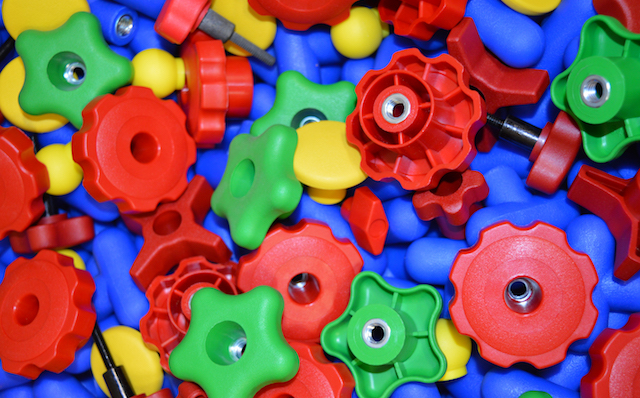 It’s been 25 years since a wobbly lawnmower knob became Mike O’Connor’s inspiration to manufacture better quality plastic knobs. “One day when I was cutting the grass, my lawnmower started vibrating and one of the two knobs halfway down the handlebar fell off into the high grass,” he remembers. “When I came back around, I hit it and was very unhappy about ruining both the knob and the lawnmower blade.”

Having worked with vibration-resistant fasteners, O’Connor questioned why vibration-resistant knobs were not used on lawnmowers. After thorough research he realized it was because no one had thought of it yet. With the help of an engineer, O’Connor developed a design that sparked the chain reaction launching his career in knobs.

Within nine months, knobs sales reached $1 million and in 1992, Innovative Components, formerly known as The Knob Source, was born. The company started out sharing a small factory in Long Grove, Ill., with a tool and die maker but quickly outgrew the space. In 1998, Innovative Components relocated to its long-standing and current headquarters in Schaumburg, Ill.

“Innovative Components has the most diversified line of proprietary plastic knobs, quick release pins and latches in the world,” says O’Connor. The company also has a diversified customer base with more than 1,100 active accounts. Innovative Components provides solutions to a wide variety of industries, with no one industry comprising more than 15 percent of the company’s total business.

“We are the dominant player in the lawn and garden arena. You’ll find our products on almost every lawnmower made in the United States, but it’s still not a huge proportion of everything we do,” shares O’Connor.

Innovative Components is one of only two companies left in the United States that primarily focuses on plastic knobs, according to O’Connor. “But we are the only company in our industry that owns our own tooling manufacturing facilities making our own molds and dies,” he adds. “That gives us a big advantage in product development and problem solving for our customers.”

In addition to its 30,000-square-foot, ISO 9001:2015 certified manufacturing facility in Illinois, the company also owns and operates a 25,000-square-foot factory in Cartago, Costa Rica. Componentes Innovadores was opened in 2006 to combat the threat of international competition. This sets the company apart because it gives it access to worldwide competitive costs and labor rates.

Most Costa Ricans speak English, so there is no communication barrier. Both facilities are located in the central time zone, which allows operations to run simultaneously. Most importantly, it’s only a two-day journey by ocean for freight to Miami. All of these are significant advantages over utilizing Asian factories. 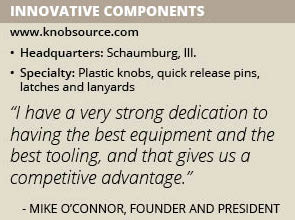 Reinvesting Generously
To ensure Innovative Components remains a fierce competitor, O’Connor heavily reinvests into the company. “We utilize the absolute best machinery in the industry,” he adds. “Sixty-five percent of our injection molding equipment is two years old or less. I have a very strong dedication to having the latest technology and equipment which makes us more efficient at manufacturing.”

In 2016, Innovative Components also invested in new state-of-the-art ERP software specifically for injection molders. Its capabilities include production monitoring so every cycle and transaction is recorded. Having this statistical data allows the company to effectively make analytical decisions. “The overall efficiency gain is 33 percent since we put in the software. That’s incredible. We have not even scratched the surface of what the software can do,” O’Connor says.

The Best People
“In general, I believe we have the best people and that’s our differentiator,” O’Connor says. “Although we employ automation for certain areas of production, we are still very labor intensive because of the variety of products we offer and the relatively small production runs that we do. When automation doesn’t make sense, we use old-fashioned manual labor because we aren’t willing to walk away from any of the market.”

Although finding less-than-skilled or assembly labor in the United States has become more of a challenge as the unemployment rate falls, Componentes Innovadores has no trouble securing skilled labor in Costa Rica. The country hosts an overabundance of youthful yet highly educated manufacturing professionals in a land limited by the number of actual manufacturing companies.

However, back in the United States, Innovative Components recognized there would soon be a gap in skilled laborers and began partnering with the local high schools to encourage students to get involved in manufacturing classes. “We began opening our doors for tours so students could see the many possibilities with a career in manufacturing,” O’Connor says.

“Sending an 18-year-old to work abroad enhances the transition into adulthood rapidly, providing independence and responsibility while being mentored by adults who are serious about their careers,” O’Connor says. “This experience changes people for the better.”

Innovative Components also partners with the local high school districts to host transitional programs preparing individuals with special needs for the workforce. This program allows the students to gain experience and understanding of positions in both manufacturing, as well as administration. “Our very first manufacturing employee 25 years ago was a special needs individual,” O’Connor remembers. “We have always had a focus on helping the community and providing kids an opportunity to learn new job skills so they have a chance to develop and have productive, meaningful lives.”

Moving forward, Innovative Components will continue to invest in technology and machines and expand its product lines while focusing on developing its people to be the best in the industry. “We have consistently and organically grown every year,” O’Connor says. “As the owner of a private business, I am interested in being the best at everything we do.”