Companies such as Plastic Molding Manufacturing are well positioned to support the rise in domestic production. The injection molder has four facilities located in Massachusetts, Connecticut, Pennsylvania and Indiana, enabling it to serve clients across the country. The company started in metal fabrication and when the industries metal-to-plastic conversion started rising, Plastic Molding Manufacturing began focusing in on injection molding. It also has sister companies that specialize in electronic board assembly and fastener distribution. Our focus is to bring manufacturing back to the U.S.,” CEO George E. Danis says.

Plastic Molding Manufacturing was founded in 1968 to serve Massachusetts’ high-tech industries. In the five decades since, the company was evolved with the rises and dips in the economy and the progress of technology. The 1990s were a boom period for the injection molding industry. Manufacturing in the United States was prosperous and companies needed an endless wave of plastic products and parts. The demand for plastic molding brought many startups into the market that competed for the business of smaller manufacturers.

Then American manufacturing began to decline in the early 2000s as globalization took hold. The country has lost more than 5 million manufacturing jobs since the start of the millennium, according to the Bureau of Labor Statistics. Some of Plastic Molding Manufacturing customers went under, others merged and more cut back. The company put its own growth plans on hold for the rest of the decade as it weathered decreased demand followed by the Great Recession. 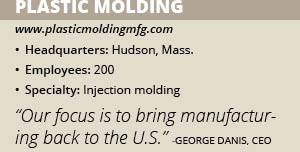 When the economy began to rebound Plastic Molding Manufacturing went back into growth mode. Danis purchased ResTech Corp. in 2010, another Massachusetts-based injection molder that was underperforming and losing money. Plastic Molding Manufacturing cut ResTech’s overhead expenses by centralizing some of its operations, freeing it to focus on customers and sparking a turnaround.

ResTech turned out to be just the first in a string of acquisitions during the next six years. Plastic Molding Manufacturing’s Danis began looking for similarly troubled injection molders that made quality products, but needed help in streamlining the business. In 2013, Danis purchased Connecticut-based TechAtlantic and a year later he bought Northeast Mold, a company that specialized in two-shot molding.

In each case, Plastic Molding Manufacturing centralized the facility’s overhead – accounting, marketing, purchasing and IT – while keeping the manufacturing jobs in place. Danis is proud that many of the plant managers and employees who worked at those companies before being acquired are still in place today.

Eliminating the individual ownership and redundant back office functions enabled those facilities to operate profitably. “It really has been a very interesting and successful process,” he says. “It helps our people, alongside our corporate growth.”

Although some functions have been centralized, the facilities themselves run independently. “Our people are very committed to succeed,” Danis says. “We have totally left them alone. The only thing we expect from them is a daily report in various areas.”

A major way in which Plastic Molding Manufacturing is serving its employees is through improved health benefits. At a time when many businesses are scaling back medical plans in the face of rising rates, Plastic Molding contributes 70 percent of the cost of insurance plans and worked to increase employee participation from 55 percent to 70 percent. Providing an attractive insurance package helps Plastic Molding Manufacturing’s recruiting efforts, but Danis says it’s even more important in protecting current employees. “Most companies are going the other way so it’s very important we’re helping our employees,” he explains.

Between its four facilities, Plastic Molding Manufacturing operates 108 injection molding machines, including six within a clean room at its Massachusetts plant set aside for medical products and four two-shot injection machines at its Connecticut plant. The combined production of all four facilities tops a million parts per day and two plants are equipped for a 500-ton capacity to handle the largest items.

The company continues to upgrade its capabilities and recently finished a $1 million investment in tools and automation at its Massachusetts facility. “It is important to stay ahead of the expectation of your customers in the technology,” Danis says of the need to continually invest in the facilities.

Plastic Molding Manufacturing’s expansion during the past four years is about more than reaching new customers; it allows the company to better serve existing clients through both capacity and engineering. “A lot of our big customers expect and need to have a contingency plan, which we are able to provide by having four plants,” Danis says. “We are a big supporter in engineering and have the ability to support a customer to improve their design to be able to manufacture a product easier and more consistently.”

Danis wants to take the company’s services to an even larger audience. He is negotiating with independent injection molders in Ohio, the Carolinas and San Francisco about purchasing their operations. “Soon we hope to expand further south and further west,” he says.