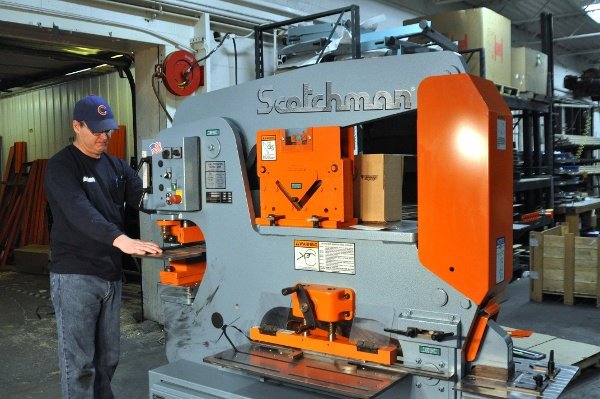 The oldest hydraulic ironworker manufacturer in the world celebrated its 50th anniversary in 2017 in its hometown of Philip, S.D. Scotchman Industries manufactured its first-ever hydraulic machine in 1967 and the Scotchman Ironworker has become synonymous with quality machinery.

Kroetch’s father, Arthur Kroetch, was an entrepreneur who evolved his businesses to meet the needs of local industries. In the 1950s, he purchased a junkyard and founded Art’s Salvage where he bought and sold car parts and picked up scrap iron to resell. During that time, Arthur was fixing machinery for farmers and ranchers, and selling cattle insecticide.

Arthur Kroetch invented an incecticide applicator and began making tens of thousands of these cattle oilers, which ranchers put in pastures for cows to walk beneath to get covered with insecticide and keep pests away. In the late ’50s, Kroetch began manufacturing steel gates and corrals, and changed the company name to Little Scotchman. “There was a sticker they used to put on these corrals that had a Scottish guy,” Jerry Kroetch says. “The Scottish guy became the mascot of sorts and the company was known as Little Scotchman. It changed to Scotchman Industries in the mid-1970s when we outgrew the ‘Little.’”

In the early 1960s, Arthur Kroetch wanted a hydraulic ironworker for his manufacturing needs and contacted a man in Minnesota about his invention. Kroetch bought the patent in 1966 and produced the first Scotchman Ironworker in 1967. Some years later, the company purchased Excel Manufacturing in Manitoba, Canada, to provide a line of ironworkers that ranged from 50-ton to 90-ton capacities.

“The beauty of our business is that we sell products to the one guy working out of his garage at home to Fortune 500 companies, high schools, tech schools, universities and the United States government,” Jerry Kroetch says. “If you work with metal, potentially you have a need for our product. Our machines can be used in full production or maintenance departments.”

In celebration of its 50th anniversary this past September, Scotchman Industries held an open house at its factory in rural South Dakota where the locals and customers from as far as Chicago and Minneapolis came out to celebrate. The company raffled off a Scotchman 50514-EC 50-ton to a school chosen by the winning customer.

“Part of the raffle was asking our customers to send in a testimonial on why they like Scotchman,” Kroetch says. “We took all the entries and drew a winner, which was Blauch Brothers Mechanical in Harrisonburg, Va. They chose Winchester Public Schools in Winchester, Va., so the machine will be donated to that school.”

In addition to its reliable craftsmanship, Scotchman Industries raises the bar when it comes to experience and expertise. The company has employees who are celebrating tenures as long as 45 years and their know-how is unparalleled in the industry, Kroetch notes. 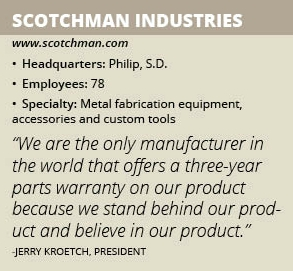 “We will also always have someone answer the phone,” he adds. “A lot of companies think they are saving a couple dollars with an automated system, but they are losing more by not having that personal touch. Customer service and our warranty set us apart by far from all the competition.”

Although all of Scotchman Industries’ machines come with standard features, the company also manufactures custom tooling for its customers. “The hydraulic ironworker is a lot like a Swiss army knife – you can do numerous different things with it,” Kroetch explains. “We have a special tooling department in our manufacturing facility that engineers custom punches, dies and tools to adapt onto the standard ironworker.

“Over the past 50 years, we have sold dozens if not hundred of machines the customer didn’t necessarily need, but they needed the tool we built that mounted on the machine for whatever function that may be,” he continues.

Scotchman Industries has its manufacturing process “down to a science,” Kroetch says. “Everyone can improve and we have taken lean manufacturing to heart,” he adds. “We try to have all of our work stations close together and tools in multiple places so the operator can just rotate and grab a tool to continue on with what he or she is doing. We try to implement as much lean manufacturing as we can.”

“I was reluctant to go to four 10-hour days, but now my guys start at 5 a.m., take two 30-minute breaks and they go home by 3:30 p.m.,” Kroetch says. “If I was to change it now back to five eight-hour days, I think they would quit. They have evenings available to do whatever they want and they always have a three-day weekend. If we need to work overtime, it is on Fridays from 5 a.m. to 1 p.m., but even so, they still have two-and-a-half days on the weekends. They love it and I don’t think 10 hours makes them too exhausted because I give them the tools they need to make their jobs less stressful.”

Scotchman Industries cycle-counts to manage inventory. “We have one employee who that’s all he does for 40 hours a week and 52 weeks a year,” Kroetch adds. “Years ago we had to shut down the factory for three to five days and count inventory. Now with cycle counting we don’t have to shut down [and] auditors can do random spot tests in our system to make sure they are accurate. They are happy and we continue on.”

All training is done in-house at Scotchman Industries and finding new talent can be a burden in rural South Dakota. “Most of our employees are great workers, but they aren’t skilled machinists or trained welders,” Kroetch explains. “We have great, hardworking people, but we have to do 95 percent of the training.”

Scotchman Industries will pair a senior welder or machinist with a new employee for 30 to 60 days of training. “We try to cross-train as much as we can so if someone is sick or out we can do that function without missing a beat,” Kroetch adds. “It’s not hard to do, but finding the right time to do it is the hard part.”

Scotchman Industries follows the old rule of thumb that, within reason, one has to spend money to make money. For the past three years, the company has invested more than $5 million in CNC equipment. “I don’t spend a million or two every year, but in the last few years I have because the machines we are still using are getting older,” Kroetch says. “Once you get past the 12- to 15-year window on CNC machinery it’s hard to find parts because the manufacturer no longer offers the parts you need. And if the machine breaks down it cripples the manufacturing process.”

The company invested in the new machines also to keep up with its growing demands. The CNC machines are faster and also fully automated to allow the company to run them unattended overnight. “The CNC machinery is our automation,” Kroetch says. “I don’t have robots doing my welding because I need a person to produce those high-quality parts.”

Although Scotchman Industries has not yet added more automation into its manufacturing process, the company says what it decides to invest in later will depend on the workforce. “I have some of the best workers in any factory in the world, but when you live in a community of 858 people and you have to drive 85 miles to find the first stop light, hiring is a challenge,” Kroetch notes. “Rapid City is the largest community close to us and that’s 85 miles away. In most of the nearby towns, people have jobs and unemployment is virtually zero percent, so it’s difficult to find people.”

Moving forward, Scotchman Industries will continue to look for new products to add to its portfolio that are of interest to its current customers. “We will continue to keep our eyes open and work harder,” Kroetch says. “My main goal is to continue to sell enough product to keep 78 people busy for the rest of their working career. My wife, Karen, and I have been married for 38 years and she is the vice president of finance. Her office is right next to mine and without her I wouldn’t be able to do what I do.”