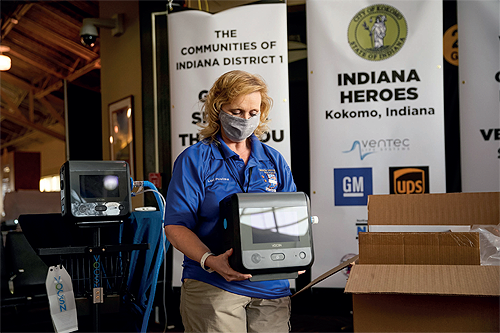 The bringing together of ventilator expert Ventec Life Systems and the manufacturing power of GM began with a phone call on March 17 between GM Chairman and CEO Mary Barra and representatives of StopTheSpread.org, the nation’s co-ordinated private sector response to Covid-19. StopTheSpread.org suggested GM work with Ventec, in order to produce its VOCSN ventilators on a much larger scale. During this pandemic, ventilators are a key resource in the public health safety net to ensure the right ventilator is available at the right time for Covid-19 patients in respiratory distress.

Following the calls on March 17-18, a flurry of activity ensued. On March 19, a GM team departed for Ventec’s facility in Bothell, Washington, and on March 20 GM engaged its global supply base and within 72 hours, it had developed plans to source 100 per cent of the necessary parts.

March 20 also saw the formal announcement from GM and Ventec, in cooperation with StopTheSpread.org, that they were going to collaborate to enable Ventec to increase production of its respiratory care products to support the growing fight against the pandemic. Ventec leveraged GM’s logistics, purchasing and manufacturing expertise to build more of its critically important ventilators. As Chris Kiple, Ventec Life Systems CEO stated at the time, this partnership will help save lives. “With GM’s help, Ventec will increase ventilator production. By tapping their expertise, GM is enabling us to get more ventilators to more hospitals much faster,” he said.

Mary Barra, GM Chairman and CEO added: “We are working closely with Ventec to rapidly scale up production of their critically important respiratory products to support our country’s fight against the Covid-19 pandemic. We will continue to explore ways to help in this time of crisis.”

Within days of these statements, crews began preparing GM’s Kokomo site in Indiana for production, and hiring commenced of more than 1000 team members from the community to join current GM employees to ramp up ventilator production.

Standing proud
On March 27 President Trump signed a Defense Production Act memorandum, and on that same day, GM and Ventec announced that GM would build Ventec’s VOCSN critical care ventilators at GM’s Kokomo manufacturing facility with FDA-cleared ventilators scheduled to ship as soon as April. The effort was in addition to Ventec taking aggressive steps to ramp up production at its manufacturing facility in Bothell, Washington. The companies added thousands of units of new capacity with a significantly expanded supply chain capable of supporting high volume production. GM contributed its resources at cost. Chris Kiple commented: “The unique partnership combines Ventec’s respiratory care expertise with GM’s manufacturing might to produce sophisticated and high-quality critical care ventilators. This pandemic is unprecedented and so is this response, with incredible support from GM and their suppliers. Healthcare professionals on the front lines deserve the best tools to treat patients and precision critical care ventilators like VOCSN are what is necessary to save lives.”

Mary Barra noted that the company was proud to stand with other American companies and its skilled employees to meet the needs of this global pandemic. “This partnership has rallied the GM enterprise and our global supply base to support Ventec, and the teams are working together with incredible passion and commitment. I am proud of this partnership as we work together to address urgent and life-saving needs,” she said.

She added: “GM is in the position to help build more ventilators because of the remarkable performance of GM and Ventec’s global supply base. Our joint teams have moved mountains to find real solutions to save lives and fight the pandemic.”

Delivering ventilators on this scale and in this short time frame meant that GM and Ventec had to contend with a raft of challenges, including the implementation of extensive health and safety protocols in the workplace. Indeed, protecting the health of the GM team building Ventec’s critical care ventilators in Kokomo was a top priority and strict protocols were put in place to look after the team on site. Extensive screening, cleaning and other CDC-recommended procedures were instigated when volume production of Ventec’s critical care ventilator began in April.

Exceptional performance
Dr. Jeffrey Hess, GM’s corporate medical doctor, confirmed that a safe workplace was imperative, given that the men and women building these ventilators raised their hands to help save the lives of people suffering from Covid-19. “We will create a safe workplace using CDC guidelines and scientific data,” he stated.

Terry Dittes, vice president, UAW-GM Department also acknowledged the vital role that the team was playing in this effort: “As our nation struggles with the Covid-19 pandemic, volunteer UAW-GM members are doing a tremendous service for our country by volunteering to come to work to make ventilators in Kokomo. For that reason, the UAW has worked with GM to put in place stringent CDC health and safety protocols. Our goal is to make sure that each and every day, people return home to their families and communities safe and healthy. We applaud their courage in volunteering in our nation’s time of need, and we commend GM for working with the UAW to save lives across the country.”

It is hard to believe that the team achieved so much in such a short space of time, with another significant milestone reached on April 8, when The U.S. Department of Health and Human Services awarded GM a contract under the Defense Production Act to build 30,000 VOCSN V+Pro critical care ventilators, by the end of August.

By April 17, the first VOCSN V+Pro critical care ventilators produced by the joint venture GMwere delivered by UPS to Franciscan Health Olympia Fields in Olympia Fields, Illinois and Weiss Memorial Hospital in Chicago. A third shipment was delivered by UPS to the Gary/Chicago International Airport on April 18 for distribution to other locations where the need was greatest.

In just one short month, the teams from GM and Ventec went from an introductory phone call to delivering life-saving technology to frontline medical heroes. The partnership between GM and Ventec has now delivered more than 20,000 critical care ventilators to the U.S. Strategic National Stockpile for the U.S. Department of Health and Human Services (HHS). The companies are on track to complete the federal government order for 30,000 critical care ventilators by the end of August (at time of writing).

The partnership between Ventec Life Systems and General Motors illustrates what can be achieved when two exceptional companies work together for the greater good. It combines global expertise in manufacturing quality and a joint commitment to safety to give medical professionals and patients access to life-saving technology as rapidly as possible. The entire GM team is rightly proud to support this initiative.