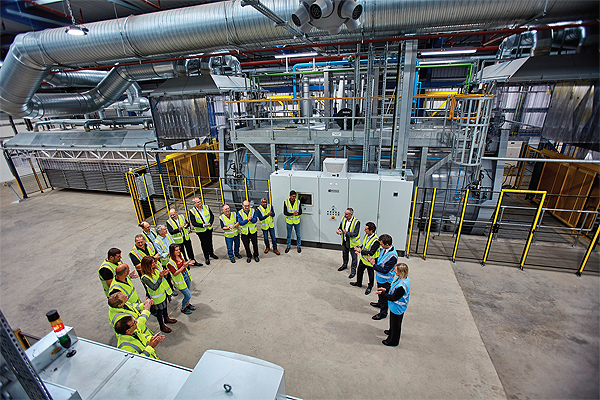 Facing considerable growth in demand for its specialised lightweight foams, Zotefoams is currently investing heavily in its manufacturing sites around the world

It was while working beside none other than Thomas Edison himself, that English engineer, Charles Marshall developed an interest in the production of the puncture-proof tyre. The year was 1921 when Zotefoams, then known as Onazote Limited, developed the world’s first hard and soft expanded rubber, with Marshall drawing inspiration from the work of the Pfleumer brothers, who had conceived the original concept of filling tyres with some form of expanded lightweight material, rather than air.

Some 40 years later, Zotefoams produced the first polyethylene foams, before developing a range of lightweight polymer foams. Today, it is the largest manufacturer of lightweight cross-linked polyolefin block foams, which it sells under the AZOTE® brand. Upon opening a new manufacturing site in Kentucky, USA in 2002, Zotefoams began exploring other high-performance foams from advanced engineering polymers, such as polyvinylidene fluoride (PVDF), nylon, and thermoplastic elastomers (TPEs). As a result, the company has developed its ZOTEK® range, as well as the T-FIT® insulation system.

“We also license patented MuCell® microcellular technology,” Group CEO David Stirling adds. “Developed specifically for extrusion applications, the process creates ‘micro-bubbles’ in the core of plastic parts or products by injecting gas into them as they are manufactured. This produces a foamed core bound by a solid skin as integral material that appears indistinguishable from a solid product.

“The high-tech foams we produce are a critical component in lots of everyday applications. From automotive insulation to yoghurt pot manufacture, they help solve the issues of a diverse mix of industries, including transportation, packaging, building and construction, medical, sports and leisure, and many more.”

Recently, Zotefoams was approached by award-winning supplier of aircraft seating Thompson Aero Seating, as the latter was working on its latest concept, which required soft-touch trims around the rear of the business class seating to negate the need for a composite panel to give structural support. The idea was to reduce the overall weight of the seat, thus lowering flammability and saving on fuel costs. Due to its exceptional heat release performance and fire, smoke, and toxicity (FST) properties, the ZOTEK F foam was selected to complement the aluminium frame around the seating. The successful completion of the project led to an estimated 1.6kg reduction in weight per seat, which has allowed Thompson the flexibility to add more technology to its seats.

The foams produced by Zotefoams’ proprietary manufacturing process are purer, lighter and offer better performance than those manufactured by other methods. As such, demand in these environmentally conscientious times continues to grow, such that the company decided to boost its foam expansion capabilities at its Kentucky facility. To this end, it initiated a four-year $42 million investment programme that would see it install three new extrusion lines and two high-pressure (HP) autoclaves, primarily to increase capacity of AZOTE polyolefin foams.

“The first HP autoclave was commissioned in 2018 along with two extruders, while the second autoclave is due to come on stream in late 2019,” reveals David. “So far, the investment has proven a key contributor to our recently-reported eight per cent increase in sales of the polyolefin foam range, and the US operation is now positioned as a significant, standalone contributor to our Group’s capacity, with North America making up 26 per cent of our revenue.”

Following the increased demand for its high-performance products (HPPs), Zotefoams initiated a £12 million project to increase the capacity of its headquarters in Croydon, UK too. “The investment has seen the installation and housing of two low-pressure autoclaves and will extend capacity for the HPP product range by a factor of up to six times. It will help us perform the expansion phase of our process and is intended primarily for the expansion of ZOTEK HPP foams. The project began in November 2017 with the facility becoming fully operational later this year,” David explains.

Demonstrating its commitment to its many customers in Central Europe, Zotefoams is currently building a new manufacturing site in Poland that will begin operations in mid-2020. “The €26 million investment will increase capacity of polyolefin foams by another 20 per cent, as it will serve to produce AZOTE foams, as well as act as a production hub for the T-FIT range of technical insulation products,” David points out. 2018 was another year of record sales and profits for Zotefoams. The company has also maintained momentum in the early part of this year, while also picking up a number of accolades and certificates. David details: “We were named winner of the ‘Innovation in Technology’ award at the PLC Awards in March. More recently, we became an accredited Authorised Economic Operator (AEO), which recognises that our place in the international supply chain is secure and our customs and procedures are efficient and meet EU standards. This has given us access to some simplified customs procedures, which will make it easier for our overseas customers to do business with us.

“We remain confident about our future prospects and are excited by the opportunities we see for continued progress. There is a clear call for reducing energy usage through light weighting and we are looking to capitalise on that,” he says. Looking to the future, David says, “Our products are frequently part of the sustainability agenda for customers and end users alike and we continually strive for efficiency improvements in our production processes. We are making advances in both the type of foams that we offer and their uses for existing materials. We know that our products and technologies offer many environmental benefits and we intend to develop more of these to address global needs in a sustainable manner.”